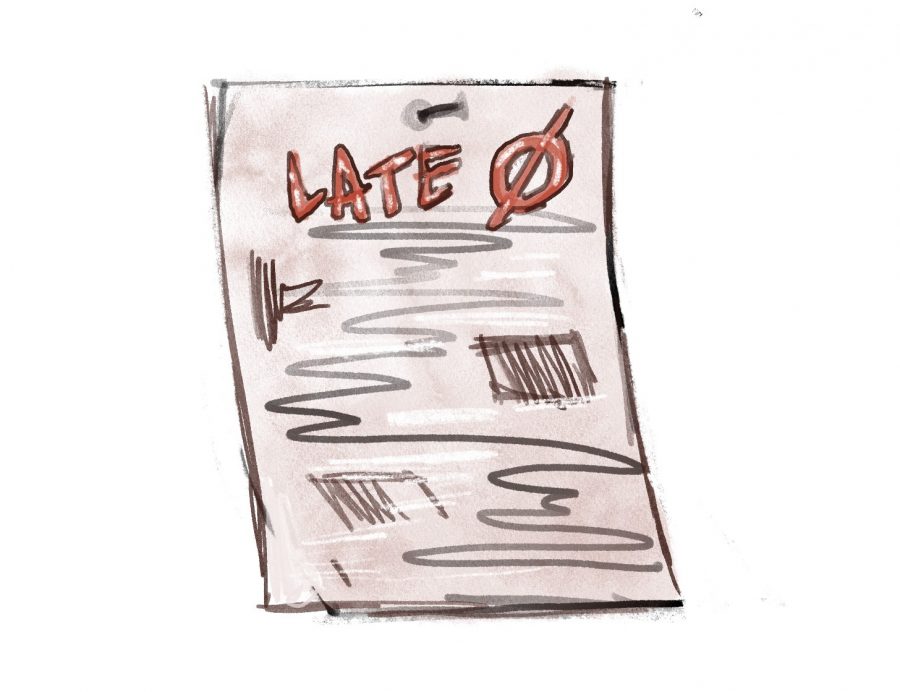 At first, I was planning on writing a simple piece about the school’s late policy. Informative, to the point, opinionless. But based on how many teachers declined to comment on this–I figure I should give them some ground to view this topic to be as controversial as they seem to perceive it.

Our school systems today reflect obsolete practices used in the industrial age, where the goal was to mass-produce factory workers rather than individuals–and the school’s late policy is a prime example of that. It is a broad, punitive punishment that makes the mistake of one simple assumption: It paints all students the same. At its core, the late policy is an equity issue–one that does not take into account varying levels of executive function, access to resources, and all the different life circumstances students undergo.

Though only one teacher accepted my interview request, I am glad it was AP Government and Comparative Government teacher Mr. Andrew Merritt. His responses inspired thought, and with over twenty years of teaching experience, held merit (see what I did there?). He had this to say about late policies: “I don’t have one. [To have one would mean] wrongly believing that all students learn at the same rate…nobody does that. We all learn at different levels, different rates, and therefore it’s unfair to say ‘well, you have one week’ when someone may need an extra few days to synthesize more of what we did in class…I want learning, not an artificial due date…I want to see what you learned.”

In recognizing the different needs of students, Merritt acknowledges that the student population is not a homogenous body. With varying anxiety and stress levels, a seemingly never-ending list of deadlines can feel overwhelming. It can become difficult to prioritize both your mental health and the three hours of math homework you have to do that day. This is especially true for students with undiagnosed mental health concerns that may make learning harder, or for those with diagnosed illnesses that do not still  ‘meet the criteria’ warranting an IEP.

While oftentimes the argument some teachers use in support for the late policy is to prepare students for the ‘real world’, it’s not necessarily a strong one. “Some of those same teachers I know come into school late. And they may turn in their document late, and they want the same, I hate using the word ‘grace’, they want the same ‘well, I forgot about it’ or ‘it slipped my mind’ or whatever, they oftentimes want it for themselves but won’t extend it to somebody else. I’m not saying everybody but I am aware of that and I don’t think the real world works like that. The real world works because people, sometimes, don’t get things done on time or they uh, their grandmother died, or their girlfriend broke up with them, or whatever.”

Basically, in the real world, life happens, and people often overlook that fact. They forget that students have lives too, each possessing a unique set of responsibilities. Merritt acknowledged that, commenting, “There are too many teachers who think this is the only thing students do. And it’s not. This may be the last thing. You may have 12 other things and this is number thirteen. Because we live in a world today where it is stressful…that we have students who have to have jobs because they’re helping their family, and that we still have teachers who still think they have to turn in their homework on time when I’m just glad they show up for class…and I’m not the only one, there’s a number of us here like that.” And we are thankful for teachers like that–throughout my four years here, I have had many who were understanding, compassionate, and willing to help however they could the second I brought up any concerns I was going through.

That being said, it shouldn’t be up to the individual to have this adjustment, this understanding, occur. Loosening, or dare I say eradicating, the late policy is a structural change that needs to happen, because there are plenty of students who don’t say a word and struggle quietly. They fall behind, and as Merritt said, “Lemme tell you the way not to motivate them is to put strict timelines on things when they’re already behind.

Simply put, the late policy is no good. Some of the teachers I requested to interview had commented in the school newspaper before. All of them were those with different late policies than the overarching one provided by the school. So it is safe to assume they felt similar to myself, if to a lesser extent, and yet refused to comment. Now, I don’t think that they’re to blame for that. I do not think their fear is baseless–but I think that points to a greater issue at hand. The implication here is that teachers at our school are too afraid to simply comment on the late policy. That, combined with the fact that this is clearly an equity issue, means we have a systemic problem at hand. If teachers are afraid to speak on this, what happens when they’re faced with greater concerns?