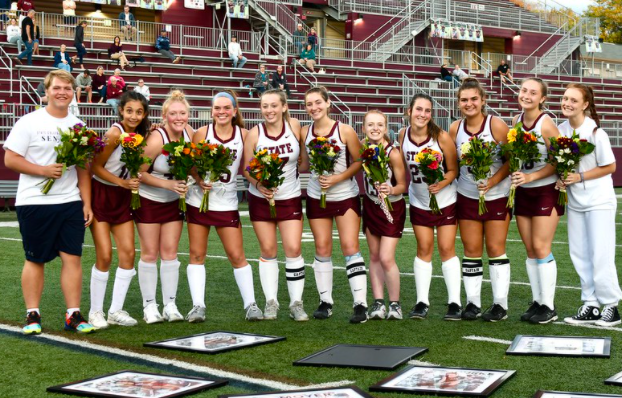 To kick off the night, the 11 seniors who are a part of the team were honored. They walked across the field, escorted by family, and a speech about them was read aloud. After they walked, they received flowers from their coaches. The 11 seniors playing on the team this year are Catalina Castano, Emma Barlett, Sierra Grande, Leah Moyer, Phebe Herlocher, Mckenna Burke, Rachel Foster, Ada Hendrickson, and Carson Roth. There are also two senior managers: Lucas Shaha and Sydney Sebora.

Following the senior ceremony, the JV team came out with fire and energy to earn a 5-1 win. Though Carlisle scored early in the first quarter, State wouldn’t let that stop their momentum. Lanie Herlocher fired a shot from the top of the circle to tie the game and bring up the energy. With that, the Lions propelled their energy and scored four more goals, which were executed by Victoria Castano, Addie Gagnon, Lanie Herlocher, and one other.

The first and second quarters were very back and forth, with both Carlisle and State returning the competitive energy. Though they couldn’t capitalize, the Lions held a strong pressure on Carlisle and were able to dominate their offensive circle. There were great shots by Phebe Herlocher, Madison Shomo, Sierra Grande, Joelle Bartlett, and Hannah Garlin, but none were able to finish and get the ball in the net.

After half-time, the Lions were able to collect their frantic energy and capitalize on their attack when Phebe Herlocher collected the ball at the top of the circle and drove it right past the Carlisle goalie. This boosted the team’s spirit and prompted another goal from Herlocher during the fourth quarter. Though Carlisle fought hard, they could not stop the pressure from State.

Molly Schreiner, junior and goalkeeper, also contributed heavily to the success of the Lions, deflecting shots and shutting out any chance of Carlisle scoring. Additionally, Leah Moyer, Caitlyn Keiter, Hannah Garlin, Ada Hendrickson, and Madi Gaul all were able to collectively work as a unit to barely let Carlisle inside the 25-yard line.

Hendrickson, one of the senior captains, believes that this team’s bond is unlike any others.

“Our team has made my senior season incredible because we have remarkable team chemistry. All of our seniors have been playing together since middle school,” Hendrickson said. “The whole team has known each other for almost as long, thanks to Coach Herlocher’s involvement with all levels of field hockey within our community”.

Also a captain, Phebe Herlocher had a special experience during senior night.

“This game was super special for us. Walking down the column of underclassmen made me feel so special to know that they all supported me, and it was awesome to hear my fellow seniors reflect on these past 4 years and announce their plans for the future.” Herlocher continued, “It’s also surreal that I can remember past senior nights so clearly, when I was feeling like mine was ages away, to now experience one for myself. Ending the night with a 2-0 win helped to end the night on a high note.”

The Lions will return to Memorial Field on Oct, 6 at 6:30 for their “Stick it to Cancer” fundraiser game against Mifflin County.