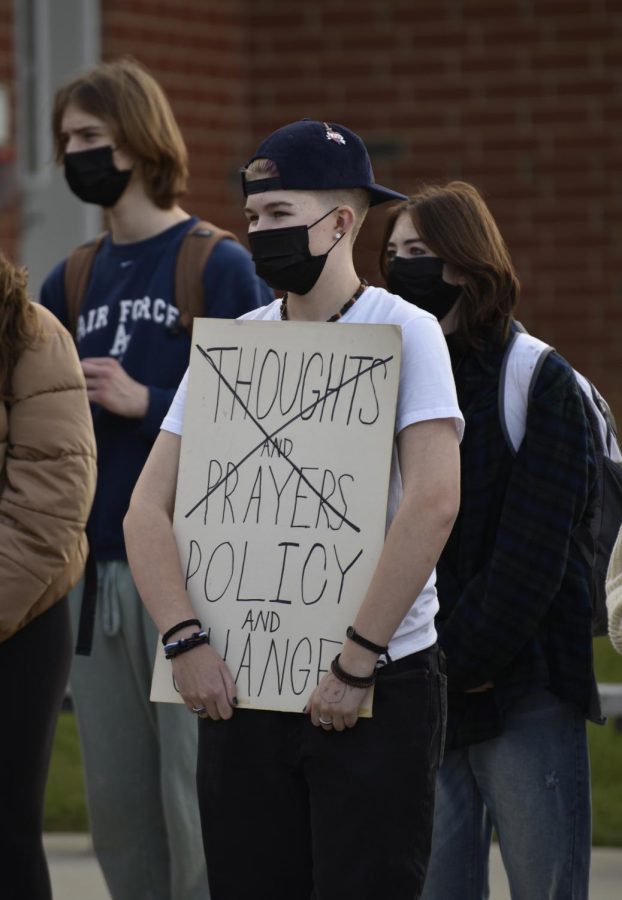 Sophomore Phoebe Henry holds a sign reading "Thoughts and Prayers, Policy and Change," with the former phrase being crossed out at the student-led walkout on Thursday, Dec. 16.

On Nov. 30, four high school students in Oxford, Michigan were killed and seven other people were injured in the deadliest school shooting since May 2018. The headlines seemed all too familiar: troubled young boy, unprotected firearms, glaring warning signs all leading to the same outcome—fifteen-year-old Ethan Crumbley emerging from his school’s bathroom with a Sig Sauer semi-automatic handgun. Being forced to read what felt like a terrible news cycle of deja vu shook students all over the country. For some, it shook them into action. On Dec. 16, roughly 200 students walked out of State High during the last block of the day to protest stricter gun control laws and mourn the deaths of students who had been lost.

Organized by State High and Delta High students Rija Sabeeh, Tanisha Mal, Lena Logan Adams, Lilly Frank, and Iris Archibald, the walk out was described as a teach-in to learn about the nuances of the Gun Control Movement, and to phonebank for gun control legislation in response to the Oxford shooting. Social media was used as the strongest tool by organizers to get the word out and gain support.

After posting the details of the event on her Instagram, Sabeeh wrote in her caption, “One of the worst things one can grow to become during moments of crisis, an integral time for change, is apathetic. What’s often mistaken as the naïveté of youth is, rather, the passion of it that tells us that we’re capable of changing the world. Because we are.”

Because students were encouraged to leave class and the school building to walk to the flagpole at the front doors, Principal Laura Tobias responded with a school-wide email just the day before.

“It has come to our attention that a few high school students are organizing a walkout on Dec. 16 to protest gun control laws and mourn the lives lost recently in Oxford, Michigan,” wrote Tobias. “This event is not school-sanctioned, and we expect tomorrow to be a normal school day with students attending class throughout the day. At a minimum, willfully leaving the school building during class is considered a “class cut” and will result in a two-hour detention.”

In the 2021-2022 student handbook, a two-hour detention is laid out as the minimum punishment for a “class cut,” which is described as missing an entire period of class period. Although students who attended the walkout were not absent from their entire class period, Tobias and administrators mandated all teachers to assign any students who attended the walkout a two hour detention.

“Despite how it may have been framed, or how we may be punished for this, what we are doing is not radical,” said Sabeeh during her opening statement. “It is a simple request, a simple demand. We want our schools, our government, our community to fight for us. Until then, we have to fight for ourselves.”

On Thursday at 2:04, right at the beginning of fourth block, students poured out from doors on every side to congregate around the flagpole. Surrounding the circle stood administrators, a few teachers, and police officers observing the crowd and its  murmurs. In the center stood a small circle of organizers, ready with signs and megaphones, cautiously awaiting the full attendees to arrive.

After a few minutes of waiting for the crowd to form, organizers began speaking to the crowd, stressing the importance of change in the way in which the US handles gun control. A moment of silence was held for the four teens who died in Oxford; Hana St. Juliana (14), Justin Shilling (17), Madisyn Baldwin (17), and Tate Myre (16).

Speakers took turns talking to the crowd, covering topics from remembering the victims to facts about gun control. Waverly Huang spoke about the effects of gun violence on mental health.

Senior Sarah Kauffman explained why she felt it was important for her to attend the event.

“The speeches at the walkout said all the things we were afraid to hear,” Kauffman said. “Hearing the names of the victims and their biographies was detrimental in realizing just how real school shootings are, and just how unprepared we are to deal with them. We could never be prepared to lose a classmate in such a cruel way.”

Following speeches, students were asked to take out their phones and call Senior State Senator Robert Casey Jr, Junior State Senator, District 15’s Glenn Thompson, and District 12’s Fred Keller to read a phone banking script provided by organizers. The script urged the support of S.736, the Assault Weapons Ban of 2021. After the calls had been made, students filed back into school. Every student passing through the doors was asked to show their school ID so that their name would be recorded. All students who attended did end up serving a two-hour detention the following week.

Junior Luca Funk, who attended the walkout, felt as though the school’s response should have been handled differently.

“I don’t think that officials and administrators understood the reason behind the movement, and what it stood for. It seems like the staff not only completely ignored our voices as a student body, but also used their authority and power to undermine a very peaceful and beautiful movement. If they invested their time into learning about the movement and what it stands for, they would’ve handled the event a lot differently,” Funk said.

Later during the day of the walkout, after school had been let out, a phenomenon of school shooting threats on schools nationwide, along with circulating social media posts as well as written threats concerning State High raised cause for alarm for many families throughout the district. That next day on Friday, many families chose to keep their kids home from school out of an abundance of caution for their safety and police presence in State High was increased. The school did investigate these threats thoroughly and none proved to create a viable danger for school members, as Friday went on uninterrupted and safely.

Administration was not available for further comment in time for the deadline of this publication.