Time is Building Up 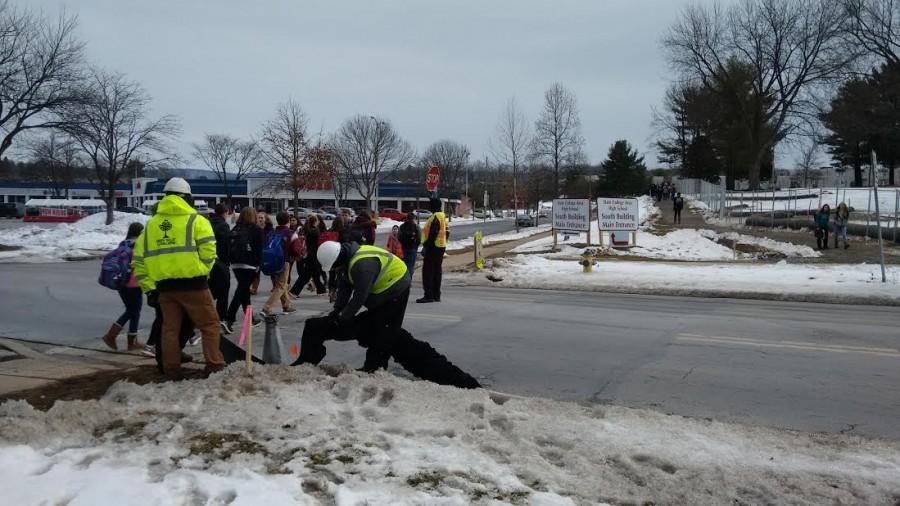 Construction at State High has finally ramped up, and students are now noticing the effects as the second semester kicks off. The construction rollout has caused confusion among students who are used to how things were before the process began.

Students expected 10 minutes between classes to compensate for the longer inter-building route, but this number was determined to be 8 minutes before the beginning of the school year. The administration calculated eight minutes as the appropriate amount of time needed to cross the street. The school has welcomed new security and crossing guards and implemented a more watchful eye over students coming and going during class times. Being stopped by crossing guards was not originally incorporated into this time, but the administrative body has recently requested that the crossing guards to try and allow as many students to cross at once during this time without significantly stopping the flow of cars.

“A lot of people are upset about the fact that they’re making us walk all the way around, yet not a lot of construction is getting done,” said junior Lylian Wang, “We don’t see any changes, and yet it’s just really inconvenient for everyone.” Some students are frustrated with the construction measures being implemented, especially because most of the construction carried out thus far has not been visible to students. Weakland said, “It’s not that nothing has been done, it’s that there’s a lot of behind the scenes internal things that you are not seeing.”

Junior Chris Dietz agreed with Wang’s comment: “The fences make it extremely inconvenient when it comes to crossing the road. They add a lot of time onto any route you want to take.” However, Assistant Principal Chris Weakland assured that fences were a necessary precaution. “Fences are there to protect students, pedestrians, whoever is walking by, because it is a construction zone.”

Weakland expressed that the administration understands that the longer-than-expected walk is an inconvenience to students. The routes were well established before construction began, but many students were unaware of how much of an influence the typical winter weather would have on their daily walk. “We knew what the path was going to be like and tried to communicate it out but until you actually walk that path you don’t actually know,” Weakland said. “Until you start swimming in the water, you don’t know how cold it’s going to be.”

Hannah Yang, sophomore, admitted that eight minutes was just enough time to navigate between buildings. “But then you don’t have time to do things like go to the bathroom. But I guess most teachers understand,” said Yang. Junior Kyle Marsh disagreed, “Teachers don’t understand how long it actually takes to cross the street.” Yang said the new route does not take an excessive amount of time to walk, but that her true frustration was the number of students crammed onto the tiny path. “There are a lot of people, and not a lot of walking space,” said Yang. Weakland explained that the “path meets or exceeds the minimum requirement. Even though it is tiny, it’s purposeful. Student travel will probably be the standard for the next couple years. I don’t think it will get worse.”

Costanzo said that he understood the administration’s motives, but wanted to see them take a different approach, “The school needed to be rebuilt, hands down, but it could be run much more successfully.”  Though some emails were issued to students and teachers, and some construction information can be found online, many students do not feel well informed about future construction plans. Some said they wanted the administration to communicate their plans better to the students. “The school has not kept us well informed,” said Marsh. Weakland acknowledged the disconnect between the administration and students and has plans to broadcast weekly construction reports on the WSCH morning announcements. He also suggested that confused students reach out to the administration or check the school website. “Phasing, all of the plans, it’s all on the website. It’s open for the public and everyone can get it,” said Weakland.

Efforts have been made to accommodate students as options become available.  For example, even though all student parking from this point forward will be restricted to the North parking lot, the school issued 30 to 40 new parking passes on February 5th to juniors with extenuating circumstances, the last passes planned to be given out this school year.

Because of demolition, students with classes in the South Building can expect some additional disruption from the construction. According to Weakland, classrooms located near demolitions zones will experience quite a bit of noise and perhaps even some vibration.