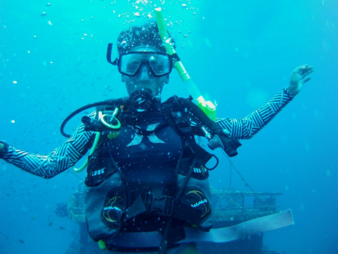 Like many kids my age, I worry a lot about getting into college. If I’m not fretting about my GPA or the amount of community service I’ve done, I’m calculating my chances of getting into my dream school. So last summer, instead of going to another math or science camp, my mom and I decided that I needed to immerse myself in something other than academics. After spending an hour or two online searching for fun, exciting summer opportunities, I came across Broadreach. The program promised to help me discover my world of opportunity. I chose to go on a 17 day Caribbean Underwater Discovery Voyage, filled with days of scuba diving and sailing in the deep blue sea. This trip stood out to me because I have always loved the Caribbean, and ever since my dad took me for a shallow dive while vacationing in Jamaica, I have wanted to become a real, advanced diver.

I packed my bags in late July and hopped on a plane from JFK airport to St. Maarten. I got to the Broadreach base later that day where I met other Broadreach campers. We were split into four boat assignments: Celia, Kilimanjaro, Moselle, and my boat, Mont Blanc. I met my nine crewmates and we took a dinghy out to our boat that was anchored further in the bay. On the boat, we met our two scuba diving instructors, Zach and Tracy, and our sailing instructor/ skipper, Attila. We played a few icebreakers, went over some rules, and got ready for bed. The counselors encouraged us to sleep under the stars as much as possible, as the cabins were a bit cramped and the Caribbean night sky was unimaginably beautiful. I saw shooting stars almost every night.

Living on a boat was a new experience for most of us. We learned how to effectively divide tasks that we needed to get done, like sloshing the deck, washing dishes, and preparing food. We had a 2 person rotation of making breakfast, lunch, and dinner for the group. We also had a leader of the day, or LOD, who took charge with the instructors in assigning tasks and encouraging the crew when they needed it.

The first morning, we got up at 5:00 AM and put our swimsuits on for the first day dawn swim to the beach. You may think that’s too early for what is supposed to be a relaxing, laid-back camp, and at first, that’s what I thought too. But I quickly realized that we had less than three weeks to get in as much sailing and diving as we possibly could.

The next few days, we were split into two groups: those who already had their scuba certification and those who didn’t. The uncertified divers, me included, did training exercises in confined water while those with certifications went on dives. We learned several useful skills, like how to clear water out of our masks, put our regulators, or breathing devices, back in our mouths if they fell out, and perform controlled emergency swimming ascents, or CESAs. CESAs are performed if a diver is in an out of air situation and does not have a dive buddy nearby to help them. He or she needs to continuously exhale while slowly ascending to the surface. To simulate this, we had to swim 30 feet horizontally while exhaling small bubbles the whole time, which was a bit challenging for some of us. In addition, we learned about various diving tips like how to avoid decompression sickness, and, my favorite, how to identify different types of fish. I can proudly pick out a sergeant major from a angelfish, or tell you what is a surgeonfish and what is a butterfly fish. This skill helped me receive my PADI certification in fish identification. So while it was a shame we couldn’t dive with the rest of the crew, our training was over in about 3 days, and before I knew it, we were all certified and working toward our advanced certifications.

Swimming 90 feet below the surface with creatures I’d only ever read about was unlike anything I’d ever done. Being able to breathe that deep underwater is just an incredible experience. We saw nurse sharks, lobsters, sea turtles, and so many different types of fish, like lionfish, parrotfish, and even a few barracuda. Over the course of my trip, I went on 20 dives; from dawn dives at 4:30 AM to night dives at 9:00 PM, we did it all. I especially loved the Chien Tong shipwreck dive off the coast of Statia. The day my boatmates and I dove there, the visibility of the water was fantastic – clear and blue as far as the eye could see. Hundreds of blue and yellow, slender damselfish swam in large schools around the sunken ship. Some swam so close to me that I could see each individual scale on their small body. As for the wreck, I felt like I was swimming around an old pirate ship. I could clearly make out the mast, deck, stern and other parts of it. I also swam through a small opening in the deck and got to go inside of the boat. That was one of the coolest parts of the whole trip. I felt like I was exploring a lost sunken treasure.

Another favorite dive was my first night dive off the shore of St. Kitts. This dive was amazing not because of what I saw, but because of what I couldn’t see. It was so dark that I could only see what my flashlight was directly pointed at, which was often coral or a small fish. Each diver had to put a glow stick on their tank so that others could see where they were. At one point during the dive, I couldn’t see my dive buddy, and didn’t know which way was up and which way was down. Thankfully, there’s a simple trick to reorienting oneself: Blow small bubbles through your mouth and see which way they float – that way is up. That night, I didn’t see many large creatures. I saw a few lobster, jellyfish, and other small animals. However, I also got to experience a beautiful, incredible sight that night. We all formed a circle and started kicking with our fins. Suddenly, we saw thousands of plankton lighting up all around us. Imagine fireflies lighting up all around you, except you are underwater and can’t see anything else. That’s what I was experiencing.  So although I didn’t see many large creatures, diving at night was exhilarating because I was scared, fascinated, and amazed all at the same time.

Scuba diving wasn’t the only fun thing that we learned how to do. We also took the helm and earned our International Yacht Training (IYT) certifications. We literally learned the ropes as we learned how to tie knots, hook a mooring ball, drop an anchor, navigate, learn the parts of the boats, and hoist the sails. One day, we even had to sail about an hour from St. Kitts to Statia without help from Attila. This included performing engine checks and preparing the sail by ourselves. My role was to pull the line that raised the mainsail. With some teamwork and communication, we successfully got to our destination.

We also had land time at some of the islands. In St. Barths, we had a few hours to explore the town. We got lunch at a local creperie, stopped at a souvenir shop to buy a few keepsakes, and tried what we heard was the drink of the Caribbean, a fizzy grapefruit juice called Ting. On the island of Statia, we got to hike up Quill Volcano. We were even able to go inside of the crater if we chose to. Some people stayed at the top because it was a steep descent into the volcano, but I went down, and it was an experience I will never forget. It had turned into a rainforest, full of tall trees and lush plants. There was no real path, just boulders that you had to climb down. Thankfully, ropes had been strung from tree to tree so that you could hold onto them in case you lost your footing on the way down, and so that you could pull yourself on the way up. In Saba, an island populated with around 2,000 people, I, along with the rest of Mont Blanc, was supposed to spend a day doing community service, specifically building a pathway on a hiking trail. Unfortunately, I got a persistent rash on my arm, and had to go with Tracy to see a doctor on the island instead of doing community service. It turned out to be from all of the sun I was getting, and was easily treated with a cream. Afterwards, the two of us sat down at a local coffee shop and talked about the island and our plans for the rest of the day. Tracy explained that there were only two major towns in Saba: The Bottom, which is the capital, and Windwardside. She said that the rest of the group had taken one out of seven taxis on the island to Windwardside, and that we needed to find one, or hitchhike. At first I thought she was joking, but hitchhiking is actually a common occurrence in Saba. The island is so small that everyone knows each other, and if you just stand near the road, eventually someone will be going where you need to go, and will let you ride with them. However, we found a taxi and were soon reunited with the rest of the group in Windwardside, where we had pizza and walked around the town.

I can honestly say that my Broadreach adventure has been some of the best days of my life. I’ve made lasting friendships with the members of Mont Blanc. I talk to many of them at least every week. We are even having a reunion in New York in January. I’ll never forget early morning dives with them. I’ll always reminisce about cliff jumping in St. Kitts, sunsets on Statia, and walking around St. Barths. I’ll always think about sailing in the deep blue sea. I may be back to my normal, stressful life, but when I need a minute to relax, I can always close my eyes and  remember my stress free adventure.