Leaders of the Future 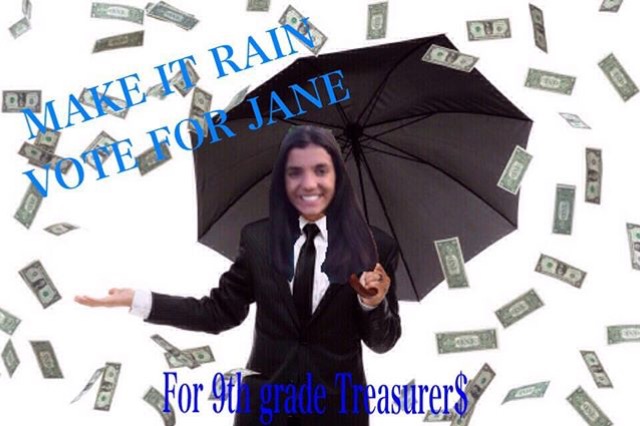 In the midst of the election for President of the United States, State High freshman just had their own election. Freshman Student Senate, a group of kids that serve as the 9th grade student government, is made up of a president, a vice president, a secretary, and a treasurer. To become one of these positions, students had to run a campaign. A few of the candidates put up posters or passed out cards, while others just spread the word through their friends and classmates.

Everyone who was running had their own reasons for wanting the position. These campaigns might have just been for the freshman student government, but they were still politics, just on a smaller scale than elections like the current US presidential election. Politicians get into politics for lots of reasons, such as fame, money, or wanting to make change in the world. The State High candidates had their own reasons too. “I just wanted to try a leadership role,” said Lauren Arnold, a 9th grader at State High who ran for president. Despite not winning, Arnold said she was not discouraged and isn’t sure if she’ll try again next year.

For another candidate, it was more about the experience in politics and the idea of making a change. Elle Haushalter, a 9th grader who ran for secretary and won, said “Politics interest me because I like knowing about what’s happening now and we will be affected.” As for the future, she might end up sticking to this path. “I’m not sure yet if politics is in my future outside of high school, but I am interested in it being my future,” said Haushalter. It was the same deal for another candidate, 9th grader Jane Biddle, who ran for treasurer. She said she looks forward to running again next year and to politics being in her future. “Politics interest me because I like to argue for what I believe should be happening and what we should be seeing,” said Biddle.
All of the students who ran for Freshman Senate put themselves out there in a way a lot of students wouldn’t. It might have been a smaller scale than the US presidential election, but the candidates still needed courage and to be able to fight for what they wanted. Only a few of the students actually won, but they all proved themselves worthy to be the next generation of senators, congressmen, governors, or even a future President of the United States. These are the leaders of the future.