The Future of STEM 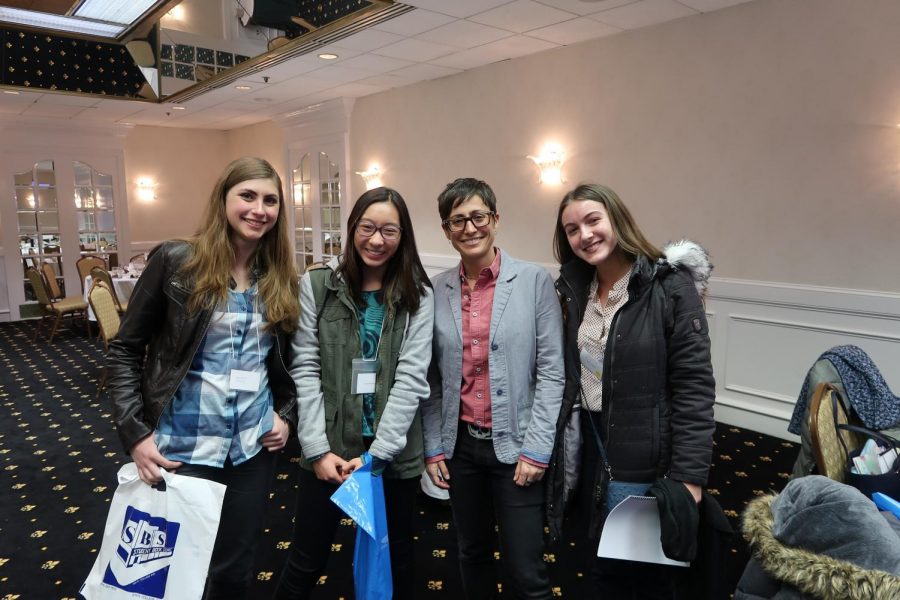 State High seniors Hannah Strouse, Hana Wiessmann and Grace Handler excitedly met and talked to Danielle Feinberg during a break period at the Women in Science conference. The students expressed their love for Pixar, Danielle Feinberg’s work and the power of films. “I learned the most from Danielle’s talk, I didn’t know how much work was put into such little details in each of Pixar’s films,” Strouse said.

Graduate Women In Science (GWIS) is a nonprofit organization of women and men around the world who support equal opportunities for all people in science. The GWIS State College Chapter held a conference, Saturday February 3, 2018 at the Atherton Hotel inviting students interested in pursuing STEM (Science, Technology, Engineering, and Mathematics) related careers paths to participate in the conference.

The Graduate Women in Science organization has impacted many lives. Karly Regan, secretary of the GWIS State College Chapter agrees with this statement. “I have made wonderful friends during my participation in the organization and enjoyed meeting people from other departments on campus,” Regan said. The organization also gave her a broader perspective on women’s issues. Santina Cruz, treasurer of the GWIS State College Chapter had a similar experience. “It has shown me that teamwork and dedication really help an organization to move in a positive direction,” Cruz said.

The conference was held in hopes of inspiring the participants at the event, and shedding light on adversity and problems women face in STEM fields. The day began with opening remarks from Fatma Pir Cakmak, President of the GWIS State College Chapter, welcoming everyone and acknowledging the diverse audience.

State High photography and cinema arts teacher, Danielle Crowe, was there along with seven State High students; Grace Handler, Katie Ache, Hannah Strouse, Joie Knouse, Grace Biddle, and Hana Wiessmann. Many of the high schoolers had expressed interest in STEM career paths. “I’m more interested in film and video, which I guess is under the Technology part of the STEM field,” Strouse said. Handler also expressed desire in the topic, and considers pursuing computer science in the years to come. Strouse, who was specifically curious about graphic design said, “I’m interested in a career which is more integrated STEM and art concepts than true STEM or true art.”

The program’s first speakers were Dr. Avery August and Dr. Katie Hunt. Dr. August is a professor at the College of Veterinary Medicine at Cornell University. He shared his story of moving from a small town to big California at a young age. Dr. Hunt, Bioarchaeologist/Osteologist and TED fellow, shared her stories of adversity, her experiences as an archaeologist in Egypt, and her deeply moving journey of recovery from cancer.

After the two speakers, the conference held a panel with Dr. Preston, Dr. Shashikant, and Dr. Guckes, prominent people in the STEM field. The panel discussion consisted of questions from the audience and the conference, asking about struggles and personal issues of adversity when working in the STEM fields. State High student Grace Biddle asked the panel of professionals about their high school lives and how their high school paths led them to where they are today. Most of the panelists agreed they worked very hard in high school and Dr. Preston who is the Dead for Graduate Educational Equity admitted to being “a total bookworm” in high school.

After the panel, the conference continued with Danielle Feinberg’s brilliant speech of how she got to where she is today, Director of Photography at Pixar animation studios. She detailed her experience getting into the Pixar animation studio, and gave the audience a look into some of the films she’s done, talking about all the detailed animation she and the Pixar animation studios have done on Brave, Finding Nemo, WALL-E, and Coco. Danielle Feinberg also talked about how difficult it was to create the City of the Dead in Coco, when the director of the film told them he wanted them to create, “a world no one had ever seen before”. As Feinberg also said, everyone at Pixar Studios is an overachiever, and after long detailed work and over four million lights used, Feinberg and her team were able to create the city we can see in the movie, Coco.“I learned the most from Danielle’s talk, I didn’t know how much work was put into such little details in each of Pixar’s films,” Strouse said.

The event continued with Dr. Meryl Mims, who spoke about negotiating through early career transitions in a discussion of self-advocacy for graduate women in science, and Dr. Esther Obonyo who talked about “A PhD as a passport for Global Mobility”.

The rest of the conference wrapped up with closing remarks from the Graduate Women in Science coordinators.

The event was successful and prompted discussion on what the world needs to do to ensure equal opportunities for all people in science fields. Regan said, “Greater acceptance of having work-life balance would help to prevent women leaving STEM fields due to the need to raise families or other commitments.” Cruz agreed with what Regan had to say and believes the world needs to support and encourage minorities in scientific fields.