Crossing the Line: Which Costumes Have Gone Too Far? 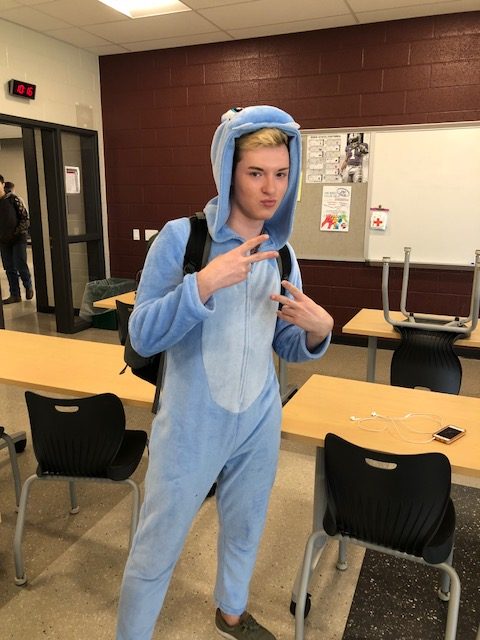 Lucas Monroe, junior, dressed in his onesie for School Spirit Day on Halloween. Many students dressed up in their creative costumes at State High for Halloween.

It’s 6 O’clock on October 31st – Halloween night. There are children running through the streets of various neighborhoods screaming, “trick or treat” with their extravagant costumes. One of the best parts of this thrilling holiday is looking at what others have decided to dress up as. However, there is an important question to ask. When is a costume crossing the line on Halloween?

There are many costume options as to what people will dress up as. As new characters from movies and books as well as concepts every year, the costumes are at an increased risk of offending others. Over the years, some costumes have created controversy and have been considered offensive, too provocative, or too gory. Some of these costumes include Freddy Krueger, french maids, characters from horror movies (like the Purge), or even animals like kittens or bunnies. These costumes that are seen in neighborhoods by adults and young children can be offensive to one’s beliefs or culture. The costumes can also make parents worried about their children witnessing too much gore or too much skin when young teens decide to wear shorter skirts. Halloween costumes can cause controversy and often offend others, so what do the people of our community feel we should do about this problem? What are the restrictions for Halloween costumes?

“Recently, I was scrolling through Instagram when I saw a young girl with her boyfriend dressed as Hugh Hefner and a Playboy bunny. I was personally offended and uncomfortable with the fact that young teens were dressing up in this costume,” junior Siena DeTurk said.

Young teens around the world seem to be dressing up in costumes that are crossing the line. One of these was the Playboy bunny which is perceived as offensive to many people due to Playboy making women seem inferior to men and letting men treat women as objects rather than human beings. So what is the solution to this problem of offensive costumes?

“We could be doing a lot better regulating our costumes. We could do research and talk with people of other ethnicities and religions to see how certain costumes might be perceived,”  junior Avery Clifford said.

As a society, we could be doing more research and surveys on how others might perceive a costume as offensive and in general, consider how others may perceive our costumes in a negative way. Big yet simple strides can be taken to make a safe and enjoyable Halloween for everyone in their inventive costumes.