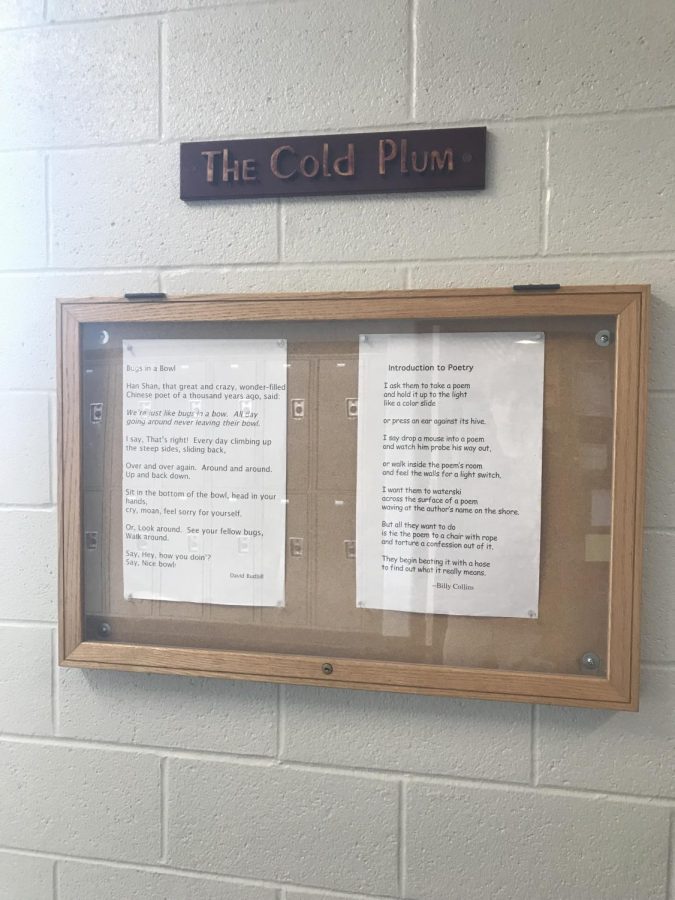 The Cold Plum Poem showcase located in D2. This is where Mr. Goldfine displayed the poems that appeared on WSCH in the mornings. Owen Moore, 12th grade, said “I feel that the Cold Plum Poetry Project was a great way to get students involved and excited about literature.”

Michael Goldfine, an English teacher at State High,  has been doing the Cold Plum Poems every Friday on WSCH for about 12 years. Now we will not be seeing his poems on air during the morning announcements. No known reason was given for the cancelation, but there were rumors of complaints about it being offensive to some people.

The name Cold Plum Poem comes from a poem called “This is Just to Say” by William Carlos Williams. Each year Mr. Goldfine started off with this poem.

“This Is Just To Say”

“I have eaten
the plums
that were in
the icebox

and which
you were probably
saving
for breakfast

Forgive me
they were delicious
so sweet
and so cold.”

When asked how he felt about the cancelation, Owen Moore, a senior at State High, and one of the people that read the Cold Plum Poems on the live announcements said, “Making the transition from watching the Cold Plum on the morning announcements as a freshman to finally being able to read one as a senior was something I always looked forward to. It’s a shame that they had to cancel it but hopefully the administration and students can create a compromise to start it back up again because I know a lot of seniors feel as though they are missing out by not being able to finally read a poem.”

Mr. Goldfine declined to give any information, as did Mrs. Pechtold, an administrator at State College High School.