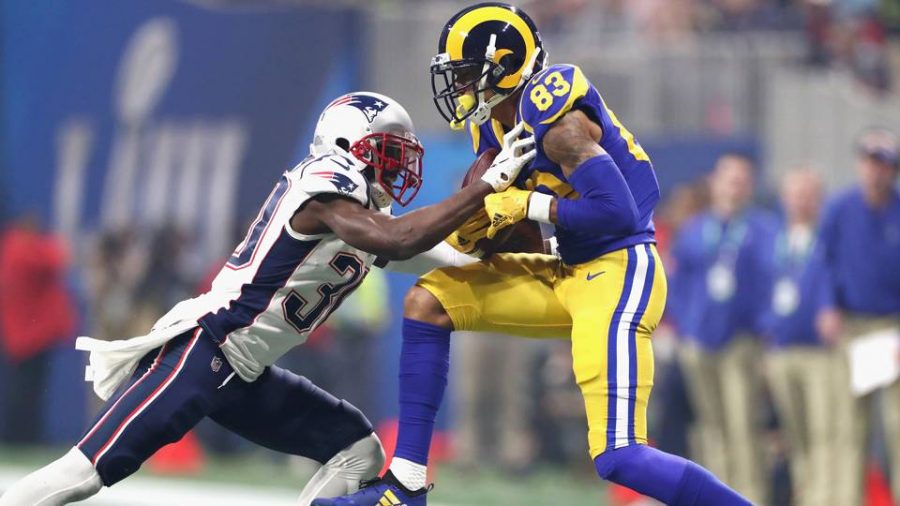 The biggest football game of the year finally kicked off, and those tuning in rejoiced for the last time of the 2018 season. Here is the whole game in review.

Uniform Matchup: The Patriots wore their traditional away uniforms, while the Rams wore their blue and gold throwbacks, which unofficially became their regular home uniforms before the start of the season. The Patriots are now 6-1 in Super Bowls while wearing their away’s, with their only loss coming to the Philadelphia Eagles last year. Teams who have worn white jerseys in the Super Bowl have now won 13 of the last 15 games.

Weather Forecast: According to Weather.com, the weather in Atlanta on Super Bowl Sunday at 6:30 ET was cloudy with a little wind and a low of 48 degrees Fahrenheit. However, this game was played indoors, so the weather did not affect the game at all.

Game Analysis: The first quarter was the start of the incredibly defensive battle that this game turned out to be. Rams linebacker Corey Littleton intercepted a Tom Brady pass on the Patriots’ first drive and Brady’s first pass attempt of the game. The Rams were unable to capitalize and went three-and-out. Later in the first, Patriots kicker Stephen Gostkowski, who is one of the most consistently accurate kickers of all time, missed a 46-yard attempt that would’ve been the first score of the game. The Rams were once again unable to do anything with the good field position and punted again. This 1st quarter ended up becoming the ninth scoreless first quarter in Super Bowl history.

The second quarter started with Gostkowski redeeming himself by nailing a 42-yarder. After that, every single drive for the rest of the half resulted in a punt for both teams. The halftime score was 3-0 New England before Maroon 5, Travis Scott, and Big Boi took the stage.

The third quarter of the game began, and fans were hoping to see some fireworks. Not the kind that came from the halftime show, but rather from the teams. Neither team performed the way fans had hoped for. Rams kicker Greg Zuerlein drilled a 53-yard field goal in the final minutes of the 3rd to tie the game at 3.

To start the fourth quarter, the Rams forced the Patriots to punt, and Rams fans and players were hoping for their team to take the lead. Their fans once again did not get what they’d hoped for, as punter Johnny Hekker punted for the eighth consecutive time, the most he had ever had to in a game in 2 years. On the ensuing New England possession, Tom Brady connected with tight end Rob Gronkowski for a 29 yard gain to the Rams’ 2-yard line. Rookie running back Sony Michel took it in the endzone on the next play for the first touchdown of the game, and the Patriots took a 10-3 lead about halfway into the 4th. LA and their 2nd-highest scoring offense in the league finally started putting a drive together, taking it close to the red zone of the Patriots. Quarterback Jared Goff tossed it to a former Patriot, receiver Brandin Cooks, who looked like he hauled it in for the game-tying touchdown. However, the ball came out right before he hit the ground. On the next play, Goff tried going back to Cooks in the endzone, but New England cornerback Stephon Gillmore read the play the entire way and picked off Goff at the Pats’ 3-yard line. Brady and co. took care of business from there, getting a field goal on the ensuing drive to go up by 10 points and making LA use all of their remaining timeouts with less than 2 minutes left. The Rams’ last chances of coming back vanished when Zuerlein missed a 48-yarder which would’ve got the Rams back to within one score. The Pats then lined up in victory formation and Brady kneeled down to end the game.

New England Patriots: In the regular season, the Patriots went 11-5, capturing their 10th consecutive AFC East Title and finishing as the #2 seed in the AFC. The Patriots made it to Super Bowl 53 after defeating the Los Angeles Chargers, 41-28, in the Divisional Round, and then the Kansas City Chiefs, 37-31 in Overtime, in the AFC Championship Game. The Patriots have now made their 3rd consecutive Super Bowl appearance (11th overall – 9th under head coach Bill Belichick and quarterback Tom Brady). They have won their 6th Super Bowl Championship in franchise history, which ties the Pittsburgh Steelers for the most in the NFL.

Los Angeles Rams: Lead by 2nd-year head coach Sean McVay, the Rams went 13-3 in 2018, capturing their 2nd straight NFC West title and playoff appearance, after not making the playoffs from 2005-2016. The Rams made it to Super Bowl 53 after defeating the Dallas Cowboys, 30-22, in the Divisional Round, and then defeating the New Orleans Saints, 26-23 in Overtime, in the NFC Championship Game. The Rams had made their 3rd Super Bowl appearance.

Super Bowl 53 Interesting Facts: This year’s Super Bowl featured the largest age differential between head coaches (Bill Belichick – 66 and Sean McVay – 33) as well as between starting quarterbacks (Tom Brady – 41 and Jared Goff – 24). McVay is the youngest head coach to ever appear in the Super Bowl. Tom Brady became oldest starting quarterback to win a title in SB history. That record was previously held by Peyton Manning, who was 39. This was the 8th time in SB history where two teams played each other in the Big Game for at least a 2nd time. Brady has now won the most titles (6) of any player in NFL history, breaking the tie with former NFL cornerback Charles Haley. A record for the longest punt in Super Bowl history was set by Rams punter Johnny Hekker, who booted one for 65 yards.