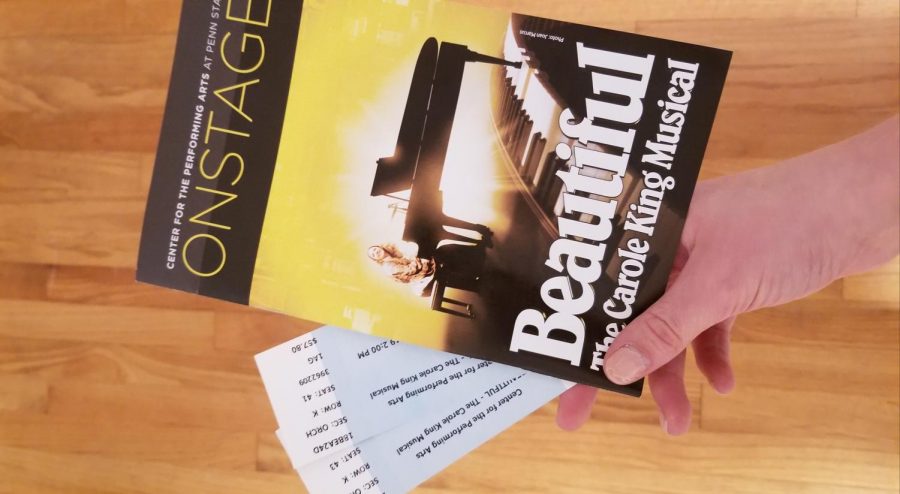 The playbill of the Center for the Performing Arts at Penn State musical, Beautiful the Carole King Musical. You can find the dates and locations for the rest of the tour at https://beautifulonbroadway.com/tour/.

Recently, the Center for the Performing Arts at Penn State hosted the Broadway tour of Beautiful, the Carole King Musical. If you are not a fan of a captivating plot, talented actors, and great music, then Beautiful is not for you. Beautiful describes the life of acclaimed singer-songwriter Carole King and the experiences behind the music we all love. The two hour and twenty-five-minute production opens on a young Carole King, then Carole Klein, played by Sarah Bockel, and tells of her passion for songwriting and efforts to pursue a career in the music industry. We see King find success as she earns a position working with Don Kirshner and falls in love with her first husband Gerry Goffin. As the first act comes to a close, Bockel portrays King’s despair as she learns of her husband’s affair. In act two, Bockel once again meticulously portrays King’s emotional return back to songwriting and triumph with her album, Tapestry. Bockel did a superb job of not only recreating King’s iconic voice, but giving the audience a clear window into the tumultuous and eventful life of a household name.

The range of songs in the show was diverse and energetic, paired perfectly with the accompaniment of the pit orchestra. All of the pieces were well performed and held a unique and personal message. The high-quality music developed throughout the show nicely, starting with King’s first song, It Might As Well Rain Until December. This is in sharp contrast to later in the production, with Take Good Care of My Baby, which Carole created while working with her husband, and King’s famous, You Make Me Feel, one of the last songs of the production. Every song evoked a unique and distinct emotion. In addition to the fantastic music, the set and costuming did not disappoint. The transitions between scenes were sharp and clean, with quick changes like the two-second costume change before the song, The Loco-motion, starring Little Eva, Carole’s former babysitter. Furthermore, the relatively small cast of 24 did an amazing job of convincingly portraying a diverse range of characters. Two of my personal favorites were Barry Mann, played by Jacob Hiemer, and Cynthia Weil, played by Alison Whitehurst. The two perfectly portrayed the relationship of King’s best friends and co-workers and added a secondary plot as well as some humor to the show.

I wasn’t alone in my opinion either: “I loved it! The show was spectacular,” audience member Jenn Moore said. She shared her feelings on the production value of the performance, adding, “Everything blended together flawlessly, the set, the costumes, and the music.”

Marshall Biever, a local musician who played second guitar in the pit, said, “The average overall quality of musicianship is very, very high among both the cast and the pit. So that was a really, really great treat to get to work with such awesome people.” He also told of the quality of people he was working with, “There were no weird attitudes or anything like that from the folks who were touring. Which was you know, I think that that’s pretty indicative of folks who are working at the highest level.”

The Broadway Musical, Beautiful was not only a wonderful musical experience, but also an interesting history lesson, reflecting the changing emotions of society, and giving viewers an inside look into life and events behind the music of Carole King. I believe I can speak for the rest of the audience in the standing ovation when I say this experience was truly, beautiful.