The Tati vs. James drama, summarized 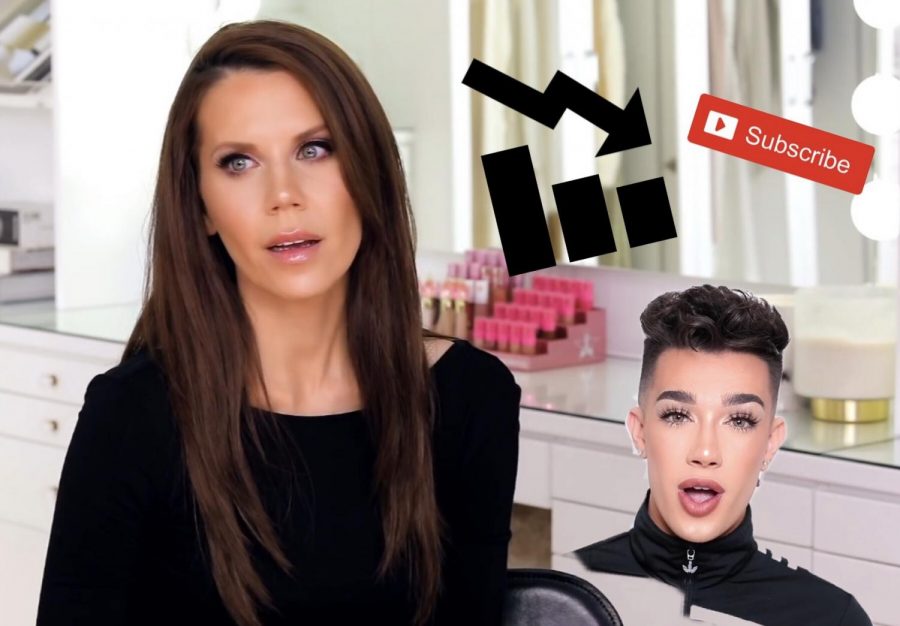 YouTubers Tati Westbrook (left) and James Charles (right) have been surrounded in controversy this month. Westbrook posted a 43-minute-long video in which she explained the various ways Charles wronged her. Fans reacted by unsubscribing from Charles. A few days later, Charles replied in his own video, clarifying Westbrook's false accusations. Senior Sydney Callenberger said, "I think that they’re being really dramatic about it. They just want attention from everyone and they’re trying to make it a really big deal."

Following the upload of beauty YouTuber Tati Westbrook’s 43-minute long video (which has since been deleted) entitled “Bye Sister” on May 10th, 2019, 19-year-old makeup guru James Charles lost over three million subscribers from his YouTube channel.

Charles has been the object of heavy scrutiny in recent weeks. From his Coachella outfits to his Met Gala appearance, his fashion sense and general reputation have been under attack. Westbrook’s video outlined the various ways Charles wronged her and added fuel to the already raging fire. “Fame, power, and a fat bank account will change almost anyone. And if you don’t have people that tell you to your face that you’re doing the wrong things, you will change,” Westbrook said.

Westbrook aired out her dirty laundry while publicly ending her and Charles’ long friendship and business relationship. She said in her video directed at Charles, “I don’t think there is any getting through to you and I don’t want to be friends with you. I don’t want to be associated with you and I need to say that very publicly so that this chapter can just be closed.” She was widely considered to be a mentor of Charles, so when Charles endorsed a rival beauty supplement brand (SugarBearHair), Westbrook felt slighted.

Charles apparently accepted security assistance from SugarBearHair during Coachella and promptly thanked them on his social media (though Charles denies accepting money for the exchange). In her video, Westbrook responded by saying, “It was more than one thing and it wasn’t just specifically about vitamins or Halo, but it was just about being lied to and feeling disrespected… [James] had nine days after Coachella to talk to me, he knows where I live…he could’ve come face to face and chatted with me because he knew that this would hurt me.”

Fans of Charles responded by unsubscribing from him. The public viewing of his demise began as various photos were posted to social media of his subscriber count falling rapidly. One day it was 16 million, one week later, Charles was down to 13.4 million. Some of Charles’ most famous social media followers including Kylie Jenner, Kim Kardashian West, Ariana Grande, Jeffree Star, Miley Cyrus, Shawn Mendes, Shane Dawson, and closest friends including Grayson and Ethan Dolan, and Emma Chamberlain have unfollowed him on Instagram. Meanwhile, Westbrook’s subscriber count is skyrocketing. She has gained over four million subscribers in the last 30 days.

Westbrook also accused Charles of spreading rumors about her and acting predatorily toward men while using his fame. “You’re doing that to have them behave sexually in your favor — even if they’re straight — and you know what, that’s not okay,” she said. “How dare you take that and laugh about it and make meme after meme about it.”

Charles responded in a video titled “Tati.” He said, “A lot of the time when I’ve had to address things in the past, I’ve acted out of impulse and I’ve gone off and tried to pull receipts or facts or screenshots and play the victim and I’m not doing that today, I’m not. That is all I have to say, I’m sorry.”

In Charles’ past experience controversies (i.e. when he Tweeted back in 2017, “‘I can’t believe we’re going to Africa today omg what if we get Ebola?’ ‘James we’re fine we could’ve gotten it at Chipotle last year’” and received ample backlash), he has been able to bounce back. This time, however, many fans are cutting ties.

Speaking on both Westbrook and Charles, junior Anna Abashidze said, “I think it’s stupid and it’s for money.”

Similarly, senior Sydney Callenberger said, “I think that they’re being really dramatic about it. They just want attention from everyone and they’re trying to make it a really big deal but I’m not gonna lie, I’m kind of interested in it.”

On May 18th, Charles fired back with a 41 and a half minute-long video in which he revealed numerous texts and DMs, effectively exonerating him from the internet’s collective attack. As of May 22nd, Charles’ subscriber count is back up to 15 million from a low of 13.4 and the view count on the video is up to 37 million views. Charles clarified the situation while showing evidence that he explicitly notified Westbrook before posting the SugarBearHair Instagram story.

Charles started by explaining the difference between a Coachella artist pass versus a V.I.P. pass. He explained that an artist pass includes a higher level of security compared to the V.I.P. pass and needs to be attained by Coachella itself or a company–in Charles’ case, the company was SugarBearHair. In Westbrook’s video, she questioned Charles’ assertion that the security transaction between him and SugarBearHair was spontaneous: “You went to Coachella, somehow had a security issue, and magically SugarBearHair is there with a contract in hand to save the day for you and all of your friends. No company would ever go out of their way to have an extra handful of passes,” Westbrook said.

“Despite what Tati said in her video, this whole situation was definitely not a big scheme,” Charles responded.

Westbrook also claimed in her video that she was given no forewarning of the sponsored post; only a few hours after he posted a SugarBearHair promo to his Instagram story was she notified. Charles addressed this by saying, “Before posting my stories I actually did text Tati first, out of respect for her, giving her a heads up about the sponsorship,” while displaying screenshots of their texts.

Charles also explained that Westbrook refused to speak with him after numerous attempts to reconnect and solve the issue. “Over the next several days I made countless attempts to contact both Tati and her husband, James, on all their different phone numbers,” Charles said. “I texted and called Tati’s business number, her family number and also James’ personal phone number as well.” He then stated that he backed away for a few days in order to give the Westbrooks some space.

Westbrook claimed in her video that Charles refused to endorse her brand because it did not fit with his audience. Charles denied that claim and showed multiple videos of him talking positively about Westbrook’s brand, Halo Beauty.

Charles continued to address Westbrook’s video while bringing up countless receipts throughout the rest of the over 41 minute-long video. Fans and objective third-party viewers turned back to Charles, accepting his video as the final say. Abashidze said, “I think he thought he redeemed himself… I don’t think it’s as [bad] as it was before. He helped himself if that makes him feel better.”

This Westbrook-Charles feud introduced the internet to the big double c’s: Cancel Culture. In an article on Vice.com, the author defined Cancel Culture as “a makeshift digital contract wherein people loosely agree not to support a person (especially economically) in order to somehow deprive them of their livelihood” (Garel). Some believed Instagram and Twitter users were too quick to “cancel” Charles without knowing all the information. Watching Charles’ subscriber count plummet became a sort of game for observers to gawk at. At the height of the drama, it seemed like observers were more concerned with making memes about Charles’ downfall than about resolving the situation.

Based on the multiple videos with conflicting claims, the internet cannot be too certain they have all the information yet. Westbrook could upload a video tomorrow, falsifying all of Charles’ claims. Who knows? Whether you find yourself on Team Tati or Team James, the drama does not look like it will end any time soon.