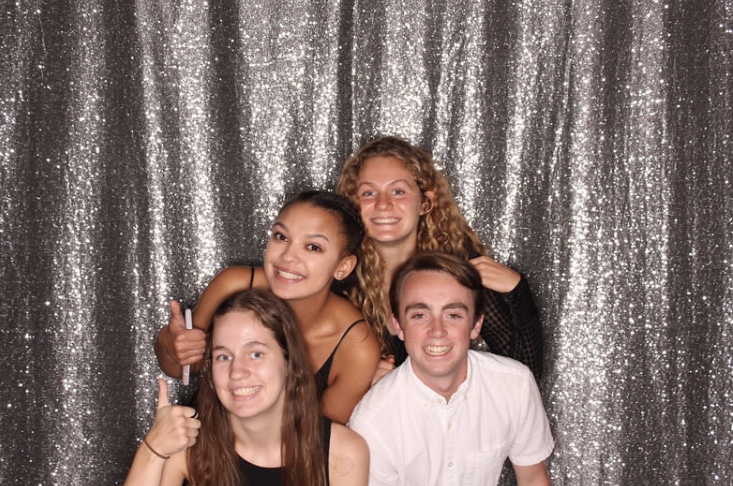 The Senior Senate poses during the Homecoming dance this fall. "I love my fellow officers. Without all of them, I wouldn't be successful in my position," Kaylee Richards, treasurer, said.

After returning to his humble abode located in Boalsburg, PA, Elliot Sheehan cracks open an ice-cold Arnold Palmer and watches as his dog runs throughout his backyard.

In the final days of his junior year, Sheehan was elected as Senior Senate President. “It feels pretty special…I have so many great ideas and I really want to see them come to fruition,” Sheehan said. Since the beginning of the 2019-20 school year, Sheehan has already implemented several of his ideas. One of his successes is the football tailgates. He has organized for pizza to be delivered to the student section at the start of every football game.

On a normal weekend, after helping to oversee football games and such, Sheehan would usually be hanging out with his older brother, Jack. After Jack moved away to college in 2018, Elliot was left as an only child in the house. The Sheehans thought a lot about this and made the decision to host an exchange student during Elliot’s junior year. Alas, Federico arrived.

Elliot and Fede soon became best friends. They did practically everything together, including participating in all of the same sports. After Fede’s exchange concluded, the Sheehan’s decided to welcome another exchange student the following year. Erik arrived from Germany this fall.

Sheehan participates in a handful of activities outside of the classroom. “I like to keep pretty busy so I’m involved in a lot,” Sheehan said. “The way I see, the more stuff I do, the less time I have for goofing off and getting into trouble.”

He is a tri-sport athlete with a passion for running. Aside from doing cross country in the fall, Sheehan “…transition[s] to indoor track for about a month in the winter.” As soon as the snow begins to fall, Sheehan starts up ski team; skiing is one of his many other passions. The final sport that Sheehan plays in the spring is varsity lacrosse.

These extracurriculars influence Sheehan greatly, especially in the political realm. “There are a lot of responsibilities with being senior class president,” Sheehan said, “but I will do my best to represent everyone in the class of 2020!”

As a passionate, dedicated, and fun-loving senior, Elly Haushalter took the stage as Senior Senate Vice President this year. She has been heavily involved in student senate for the last three years, and she continued to pursue it for one last year.

“I decided to run for student senate because I am passionate about student life,” Haushalter said. “I have been in the senate since my freshman year and I have kept running because of that passion. Every year I have enjoyed working with my peers as well as administration.”

Haushalter’s responsibilities vary throughout the year. Aside from meeting with the administration to discuss the state of the school, she works with her fellow senate members “to plan out school events like the pep rallies, prom, and graduation. We often meet to brainstorm ways to improve the school. I constantly try to think of creative things the senate can do to boost school spirit,” Haushalter said.

School spirit has been one of Senior Senate’s top priorities this fall. Haushalter said, “I think that school spirit has a huge effect on student’s high school experience.” This belief inspired the kickstart of tailgates, mini pep-rallies on football game days, and more. All of these implemented initiatives’ biggest goals are to get students involved in the school community.

Haushalter herself has been involved in an array of school-sponsored activities throughout her high school career. She is one of the Little Lion Ambassadors, a Cross Country Captain, and even helped found a new fitness club called Pulse. All of these activities have helped shaped Hashaulter’s character and have given her the ambition she needs to be a successful student voice.

The newest member of Senior Senate, Kaylee Richards, graciously accepted the position as Treasurer at the start of her senior year. Unlike the other three members who had been involved since their freshman years, Richards made the decision to run in the spring of her junior year. “I have always been super passionate about leadership, but I never thought I would have enough time to be a part of student senate with my thriving golf career,” Richards said. Following her decision to take a break from golf this year, Richards thought it would be the perfect opportunity to run for Treasurer.

Richards’ responsibilities almost directly correlate to her interests. Richards said, “Being the treasurer is the perfect position for me. I am in charge of purchase orders, planning school events, and most importantly, creating a unified environment. I love business, and this position allows me to learn more about it while working together with my peers.”

Despite her love of the work she does, Richard’s favorite part of being on senate is her fellow officers. “Elliot, Elly, and Annie have really made me feel welcomed this year and part of the family. They make all of the work worth it,” Richards said.

Aside from her involvement in senate, Richards spends her time outside of school working at her family’s business, D.P. Dough. “It has taught me a lot of customer service qualities, but I love the fact that I get to work with all of my friends ⁠— especially the Domico’s,” Richards said.

Richards’ determined work ethic and passion for business does nothing but make her a treasurer with lots of potential.

The class of 2020 voted Annie Gustafson, senior, in for her fourth consecutive year as Senior Senate Secretary last spring. Gustafson’s commitment to providing a voice for the student body has drawn her back to run each year. “I’m so glad I decided to run,” Gustafson said. “I originally ran because my friends were doing it, and to this day one of my favorite parts of the senate is the people,” Gustafson said. The people is a common theme that results in love for senate. This love does not only run throughout the senior class though: “Additionally, it’s fun to collaborate with the junior, sophomore, and freshman senates as well.”

Gustafson’s main responsibility as Secretary is to make sure everything is recorded correctly. “I take all the notes at our meetings, send emails to administration, student government, and the other senates. I also create all the spreadsheets for the Senate — no small task!” Gustafson joked, “I have grown to love spreadsheets as a result of my secretarial duties.”

Once Gustafson finishes up her work at PTSO meetings or planning school events, she spends the rest of her time still very involved. “I am the President of Model UN,” Gustafson said. She has also spent the majority of her life as a competitive figure skater. Last, but definitely not least, she is “…an extremely proud member of the State High Math Club,” Gustafson claimed as a shameless plug for her beloved club.

The Senior Senate continues to work together in order to make State High an inclusive, welcoming, and spirited environment.