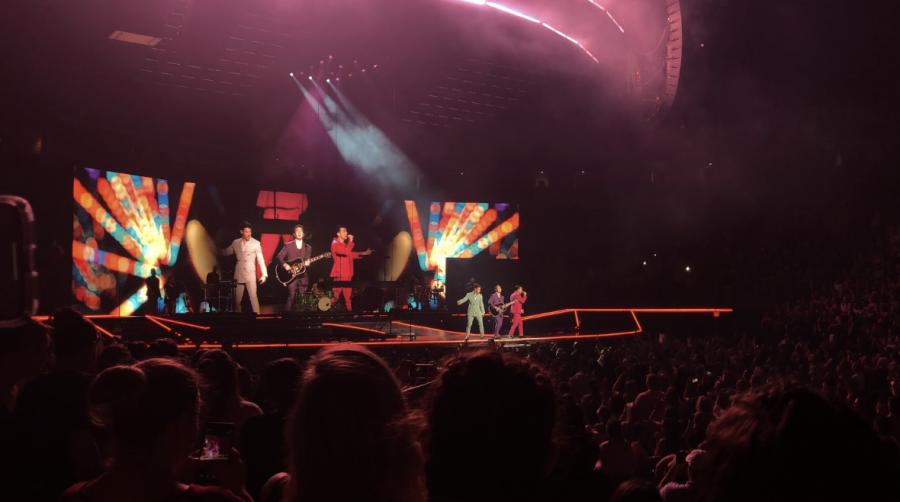 The Jonas Brothers start their concert with new song “Rollercoaster,” met with a screaming crowd of excited fans.

The Jonas Brothers have been around since their first album It’s About Time dropped in 2006. A majority of students in State High have grown up loving and listening to the Jonas Brothers’ music. After their break up in 2013, fans were heartbroken and their recent reconciliation mended these wounds.

Molly Richendrfer, a junior, said that when she heard that the Jonas Brothers were getting back together “it felt like everything was finally right in the world.”

After their new album, Happiness Begins, dropped in June of this year, they announced that they were going on a tour around the world. It is very rare that popular artists add State College, Pennsylvania to their tour, but the Jonas Brothers decided to come to the Bryce Jordan Center (BJC) on September 4, 2019. Members of the State College community welcomed them with so much screaming that it seemed as though the BJC would collapse.

The concert started with the band descending on a platform with fireworks shooting up behind them. As they descended to the stage they performed the song, “Rollercoaster,” from their new album. They continued to play a mix of both new and old songs throughout the rest of the show.  These songs included hits such as “S.O.S,” “When You Look Me in the Eyes,” and “Hold On.” Crowd picks included “Underdog” and “7:05.” They sprinkled other songs from their newest album such as “I Believe,” “Only Human,” and “Cool” into the tracklist as well.

The BJC was set up so the band could walk from one side of the arena to the other, making it so fans could see them wherever they were performing at any given time. They were accompanied by visuals introducing each of the next songs. During “Hesitate” the Brothers floated up to meet the faces of those in the upper parts of the arena. Additionally, they paid tribute to both Nick and Joe’s solo careers with a mashup of “Jealous” (by Nick Jonas) and “Cake By the Ocean” (by Joe’s other band DNCE). This part of the concert included confetti, inflatables and colorful visuals.

They took a break from their higher energy songs to perform “Comeback,” a slower song from their newest album. The song started with Kevin rising from the floor and sitting down at a white grand piano. He started playing the intro to the song and was soon joined by his brothers rising up from beneath the stage. This part of the concert was accompanied by visuals including trees and greenery.

Taking a break from the concert to talk to the crowd, both Nick and Joe talked about what Penn State means to them. Joe led the crowd in a classic “We Are” chant and Nick talked about the impact Penn State has had on their lives. He explained that one of the first people to believe in them as a band was a Penn State graduate and State College native, Phil McIntire. They then all toasted to Happy Valley saying it is “the happiest place in the world.”

The concert finished with classics “Lovebug,” “Year 3000,” “Burnin’ Up,” and “Sucker.” The whole Jordan Center was full of people, all screaming the lyrics to all the songs that they have known by heart since childhood and every day since.