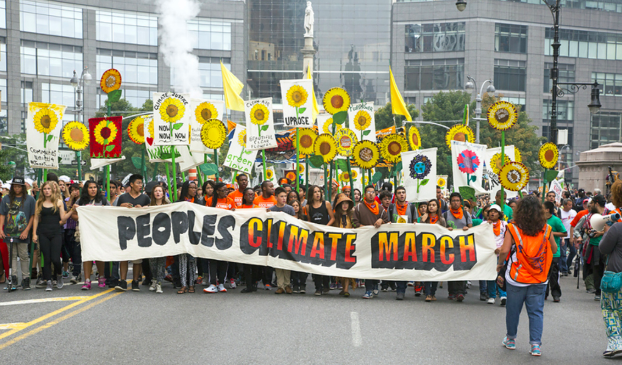 The top 10 democratic presidential candidates gathered for a climate town hall to discuss how they were going to tackle the climate crisis in their administrations. The town hall lasted for seven hours on September 4th, 2019, where voters were invited to ask the candidates questions. “I want America to come together regardless of Republicans or Democrats or your geography or any other difference,” Beto O’Rourke said. “This is our challenge, and I know that we are up to the test.”

In an unprecedented move, CNN gathered the top ten Democratic presidential candidates for a climate town hall to discuss how they would tackle the climate crisis in their administrations. The town hall took place for seven hours on September 4th, 2019, and featured Joe Biden, Elizabeth Warren, Bernie Sanders, Kamala Harris, Pete Buttigieg, Amy Klobuchar, Cory Booker, Beto O’Rourke, Andrew Yang and Julián Castro. Voters were invited to ask the candidates questions about how they were going to tackle the climate crisis. Here’s what they had to say.

O’Rourke spoke heavily of making America a global leader in tackling the climate crisis. The former Texas congressman wants Americans to band together and make the climate crisis their top priority. Rather than a carbon tax, O’Rourke supported a cap-and-trade system, which he said would be “the best way to send the pricing signal to ensure that there’s a legally enforceable limit.”

In one of his closing statements, O’Rourke said the following: “I want America to come together regardless of Republicans or Democrats or your geography or any other difference, do not let that divide us at this critical, important, defining moment. This is our challenge, and I know that we are up to the test.”

Biden promised an aggressive and swift approach to tackling the climate crisis. He mentioned implementing mass transit and taking millions of cars off the roads, becoming the world’s leader in electric cars, supporting “science over fantasy,” and bringing together countries to get things done.

“The first thing I’d do as President of the United States,” Biden said, “is call a meeting of all the nations who signed onto the accord in Washington D.C to up the ante. We have learned so much just in the last 3 years about the science of what has to happen quicker. And the world knows it.”

However, it was found that the former vice president was going to be attending a fundraiser held by an executive of a natural gas company, making viewers question whether or not he was the right person to take on the climate crisis.

Warren favored a carbon tax. “I think of this as something my mother taught me, and that is: You gotta clean up after your own messes,” Warren said. On the issue of renewable energy, she said that the main problem wasn’t production, but rather the storage of energy. The Massachusetts senator was willing to invest in science, research, and development in order to tackle the climate crisis and make renewable energy a viable option for the long term. Additionally, Warren targeted the oil and fossil fuel industries, citing that they produce about 70% of pollution and carbon going into the air comes from three industries. She said that in her administration she’d cut that by 70% by 2035.

Warren promised action. “Don’t sit around and tell me what’s not possible,” Warren said. “Sit around and look at what happens when we don’t make change. So you bet that this is a moment where we better dream big and fight hard. Because that’s how it is that we’re going to make the changes we need to make.”

Right off the bat, Sanders addressed where the money for his $16 trillion plan would come from. The money would come from ending the $400 billion paid to fossil fuel companies every year, expanding public power concepts to produce wind and solar energy to make a profit, cutting military spending on defending oil interests around the world, and collecting taxes from the thousands of jobs that would be created from his climate plan. Additionally, Sanders rejected the idea of nuclear energy and said that renewable energy would be a much more cost-effective and safe route. On the topic of fossil fuel workers, the Vermont senator promised to give fossil fuel workers 5 year’s income and guaranteed to give them the education that they’d need.

Though he has an extensive plan for the United States alone, Sanders recognizes that the climate crisis doesn’t affect just the United States. “This is not just an American issue,” Sanders said, “This is an issue that impacts the entire world. I think we need a president that reaches out to the world and says, ‘Guess what? Whether you like it or not, we are all in this together.’”

Harris started off the night by saying that she would do whatever is necessary in order to be a leader. “Back to the United States Congress, here’s my point: If they fail to act as president of the United States, I am prepared to get rid of the filibuster to pass a Green New Deal,” Harris said.

Harris also said that she would sue oil and petroleum companies and hold them accountable for their actions against the climate. “They are causing harm and death in communities,” Harris said, “and there has been no accountability.”

The California senator also said she’d reinforce the EPA in her administration, have polluters pay fines, implement a carbon tax, and use the money from that carbon tax to go to empower communities that have been ignored and are vulnerable to the adverse effects of the climate crisis.

The South Bend mayor proposed establishing a carbon tax and then rebating all the revenue back out to the American people on a progressive basis, meaning that first “low and middle-income Americans are made more than whole.” Buttigieg also discussed how he would create stability for the agriculture sector, saying that rural Americans would be a huge part of the solution of the climate crisis, but federal investment in programs such as the USDA and Conservation Stewardship Program were still necessary to reach stability.

Above all, just like many candidates before him, Buttigieg pushed the importance of unifying and rallying to battle the climate crisis. “We have to unify the country around this project,” Buttigieg said, “And that means bringing people to the table who haven’t felt that they’ve been a part of the process[…] We’ve got to figure out a way to rally, and that means everybody, from cities to farms, to the federal government, to the international community, and I am prepared to lead us to get that done.”

When asked what she would do within her first 100 days in office, Klobuchar talked of rejoining the Paris Agreement, restoring the Clean Power Plan, bringing back gas mileage standards, sweeping legislation with mayors and Congress, and making the climate crisis the top priority of her administration. Just like many of the other candidates featured that night, the Minnesota senator brought up enacting a carbon tax.

“That[carbon tax] alone will bring in trillions of dollars,” Klobuchar said, “and some of that can be used, of course, to help communities that are going to be affected by this, and by the transition, and make sure people have jobs coming out of this.”

Klobuchar noted that she supports regulated fracking, nuclear energy, and clean coal technologies. Klobuchar said that she would not support building new coal facilities or increasing fracking, but rather looking into what already exists, and seeing what reforms should be made so that said industries and remain safe. Klobuchar aimed to be realistic with her plan, noting that it would be difficult to get carbon emissions down to zero and that her $2-$3 trillion dollar plan was practical considering how she would get the money to fund it. Klobuchar emphasized the importance of tackling the climate crisis as soon as possible. “Great leaders should make decisions not for this generation, but for seven generations from now,” Klobuchar said.

He called for incentivizing farmers through funds to promote practices such as cover crops, or “ranching practices that preserve soil while minimizing the carbon footprint.”

Just like Klobuchar, Booker said that it would be impossible to reach zero-carbon electricity without nuclear energy. “Right now, nuclear is more than 50 percent of our non-carbon causing energy,” Booker said, “so people who think that we can get there without nuclear being part of the blend just aren’t looking at the facts.”

However, the New Jersey senator proposed a solution to the potential dangers of nuclear energy: Next-generation nuclear energy. “New nuclear actually portends of exciting things,” Booker said. “Where you have no risk of the kind of meltdowns we’re seeing, where we can actually go to the kind of innovations that make nuclear safer, or safe.”

In his time on the stage, Yang made it clear that he would take big strides in ensuring that the climate crisis doesn’t get out of hand any further. “As I just stated, I would end all fossil fuel subsidies,” Yang said, “and I’m going to take it a step further. I propose a constitutional amendment that makes it the responsibility of the United States government to safeguard and protect our environment for future generations.”

Yang also suggested bringing renewable energy sources into all parts of the world, especially third-world countries. In addition to combatting fossil fuels and all the degenerative components of the climate crisis, the tech entrepreneur aims for reforestation, ocean seeding, and rebuilding ecosystems that have been damaged through the climate crisis.

Additionally, Yang approached the climate crisis through the lens of economics. “This country runs on the almighty dollar,” Yang said. “It does not run on us doing the right thing by us or the planet. So what we have to do is tie people’s incentives to doing the right thing, and then, you’ll actually see their behavior change really quickly.”

Castro started off the night as the first candidate to speak. He brought up preemptive strategies to protect communities against rising sea levels, such as investing in national disaster resilience investment and in pre-disaster mitigation. “We don’t want to wait until there’s a natural disaster to actually make our communities more sustainable,” Castro said. “I would invest in that.”

The former Secretary of Housing and Urban Development acknowledged that insurance rates were going up for those in vulnerable areas, and talked of improving the system so that citizens could stay safe. “I want to make sure that people are protected, and that’s why we would make an investment in the national flood insurance program, not only to make sure that it’s around, but to strengthen it and improve it for everyday Americans who need it,” Castro said.

To hold corporations accountable for climate change inducing activities, Castro ensured imposing a carbon pollution fee on industrial-scale polluters, setting a clean energy standard, cracking down on corporations that would violate his administration’s laws, and appointing an EPA administrator who would enforce laws relating to environmental justice.

The climate crisis has quickly taken the center stage of the 2020 presidential race. With voters becoming increasingly concerned with candidates’ stances on the climate crisis, the CNN climate town hall was able to provide some answers.