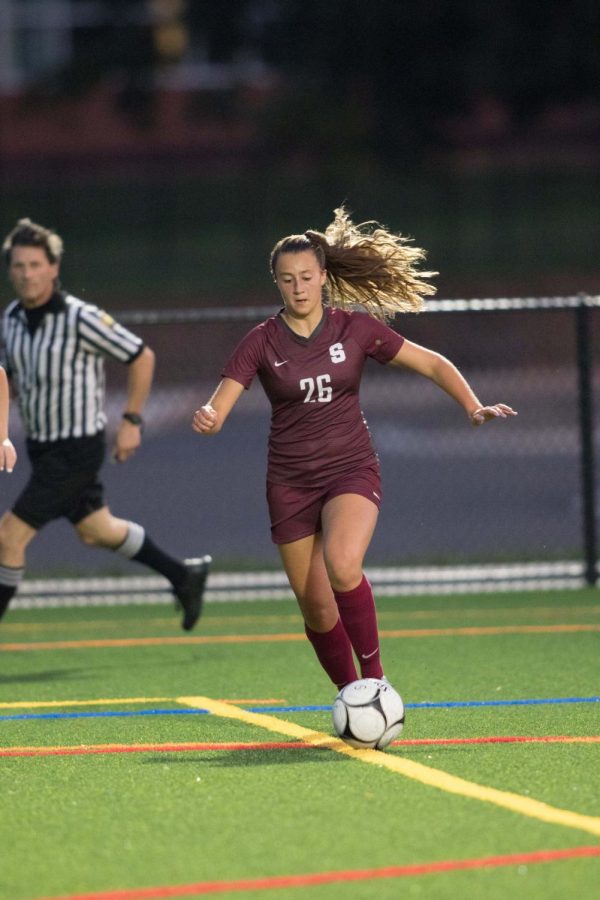 Senior Megan Stoltzfus moves the ball up the field at the girls soccer game on September 10th. The team defeated Red Land 2-1. “I think it depends how much work you put into it, and I think going into the second half, our team had the mindset that we were going to work hard and we were going to win.” Photo Courtesy of Michael Houtz

State High Girls Soccer played for the first time on Tuesday, September 10th, at the new North Field. That home-field advantage proved to be just what they needed for their first win of the season against the Red Land Patriots with a final score of 2-1.

Megan Stoltzfus scored both goals for the Little Lions. She described the team’s efforts to earn the win. “I think it depends how much work you put into it, and I think going into the second half, our team had the mindset that we were going to work hard and we were going to win. So just going off of that, I think I was pretty confident we could get it,“ said Stoltzfus. Although she’s happy with her performance, she plans to work on her shot more, which she said has already improved from last year to now.

This was the first game on State High’s new North Field. “We’re definitely excited to play for the first time here,” said Savannah Schoonmaker, one of the varsity captains.

“I think since it’s right on campus we’re going to have a lot of other teams that are just finishing up practice come down here […] and support us in our first home game,” added Alison Houtz, another captain. Whether it was the support of other athletes or not, it certainly paid off for this win, which could prove to be a turning point in the season.

The Red Land Patriots were expected to be a pretty even matchup for State High, and although the Little Lions claimed victory, it was a close game. The first goal was not until 25 minutes into the first half. There was a lot of back and forth and neither team was able to get an advantage until Red Land scored their first point of the game.

Early in the second half, Stoltzfus was able to score the first goal for State High from the 18-yard line. She later had to be subbed out because an accidental elbow to the face gave her a bloody nose. Once again, neither side was able to gain much headway. This continued for most of the half. Late in the game, Stoltzfus was subbed back in, and was able to cut left past a defender and score again at the last minute, winning it for The Little Lions.

The junior varsity game was very high scoring compared to varsity, at least for State College. State High scored goal after goal, and shut down the Patriots until the very end, when they scored their first and only time for a final of 9-1. Claire Vollmer and Megan Wilson contributed two goals each, and the other scorers for State High were Olivia Graham, Halle Rager, Alyssa Kramer, Kendall Prehl, and Grace Lundy.

“We’re really just trying to focus on playing good soccer,” said Ireland McDyre, a freshman on the team. Their expectations were met with this victory over Red Land.

Whether it was the new field, the karma from a bloody nose, or just a good game, something was going right for State High on Tuesday.