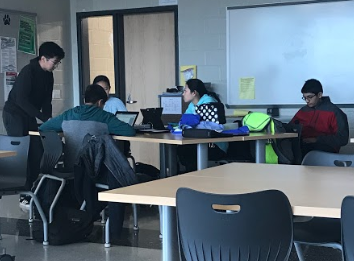 Students learn more about speech and debate events after splitting into different rooms for event introductions.

The beginning of the school year is a busy time for students, and for the multitude of clubs that exist at State High, it is no different. While students adjust to the first few weeks of school, clubs diligently begin their preparations to attract new members to their meetings. A club’s first meeting of the year is an exciting time — the hours of planning to ensure the meeting goes off without a hitch are finally rewarded. As the Thursday, September 12th school day drew to a close, those rewards were exactly what the State High Forensics Officer Team looked forward to during their new member meeting.

The Forensics Officer Team watched with pride as students trickled into the C100 open classroom after the bell, eager to introduce the club to new faces. Iris Li, a senior and the president of  Forensics Club, was especially excited about the turnout.

“Forensics has helped me develop my own voice, both physically and metaphorically,” Li said. “Now, it’s exciting to help people discover what they want to become and help them get there.” The meeting started off with general officer and club introductions. The officers previewed the forensics season, covering important registration and tournament information. After these introductions, the new members were split into three rooms for speech and debate event introductions.

The event introductions engaged many new members and especially struck a chord with Daniel Mao, a freshman who attended the meeting.

“I was interested in debating and wanted to improve my social skills,” Mao said. “At the first meeting, I was surprised at the amount of people that went. The leaders explained the interesting speech and debating events well.”

The next Forensics Club meeting will take place on Thursday, September 25th in the C200 open classroom. Students should have an idea of which speech or debate event they want to compete in for the year and expect to explore those events during the meeting. September 25th will also be the first full member meeting, meaning that new members will meet and practice alongside returning Forensics members. Wenjun Leng, a junior and the Forensics Club Speech Librarian, is already excited for the season with the full team.

“It’s a very close-knit family and everyone is super helpful. I’m looking forward to competing at tournaments with everyone,” Leng said. “It’s an amazing club to be part of.”