How do Students Really Feel About Standardized Testing? 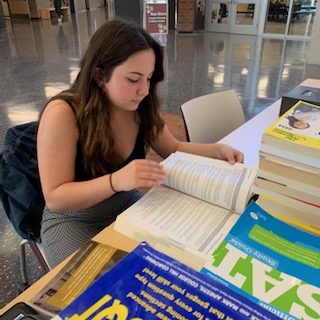 Allaina Wagner, senior, studies for her SAT subject test while helping to sell practice booklets. Wagner is starting her studying early to best prepare herself for her subject tests. “It has been a very busy year for me so far…I took a diagnostic test and did very poorly on it so [I am] kinda nervous,” Wagner said.

Standardized testing is a mountain that every high school student has to climb and can appear in many forms. Students at State High take their pick and try for their highest score periodically throughout the year. They have to take the SAT, ACT, SAT subject tests, AP exams, or Keystones.

Allaina Wagner, a senior at State High, said that going into her tests she wasn’t surprised with the test due to her preparation and studying. Wagner has taken her fair share of standardized tests. She has taken all of the Keystones, the SAT, the ACT, and is currently preparing for her SAT Subject Test. She prepared for her tests based off how she did on her previous tests. She found that she struggled with math, so she did additional math preparations.

Wagner decided to take the SAT and ACT to see how both the test were structured. Wagner said that the ACT was the better fit for her. “The ACT tests your knowledge where the SAT tests your skill,” Wagner said.

“I wish I was told that [standardized tests] don’t make as much of a difference as I originally thought, there is so much emphasis on it,” Wagner said. “Start taking everything as soon as you can, because SAT superscores so if you do really well in English then you can focus on what you need to like the math,”.

Abigail Clifford, sophomore, has only taken one standardized test at the high school level. Clifford has taken the Algebra 1 Keystone and is going to take the Biology Keystone and the PSAT this year. “I feel the school and teachers prepare us for the tests,” Clifford said. “I think the time limit is the most nerve racking thing about standardized testing.” Clifford wants to take Wagner’s advice and study a lot more and take her tests early.