Every great thing starts in a garage: the State College Rowing Team 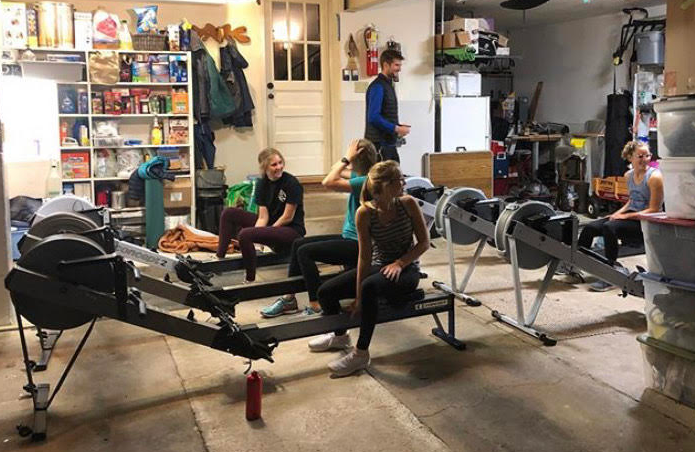 Crew team starting up their first practice on the ergs in Wyckoff's garage. The girls started off with an intense sprint pyramid. John O'Brien, the head coach always says, "It's a beautiful day for rowing."

Two girls at State High, Amelia Wyckoff, and Catelyn Janac, have recently formed and founded the State College Girl’s Rowing Team. They meet Mondays, Wednesdays, and Thursdays at Wyckoff’s house. Currently, they are using old rowing machines from the Penn State team and work out in her garage. Due to it being a team outside of the district, it is hard for them to find a space at the school. They are hoping to find a space in the school and get more rowing machines to help the team grow.

Wyckoff and Janac, co-managers of the team, have begun something that has made an impact on many girls from State High. “I started the rowing team because I wanted another spring sport for girls that we didn’t have offered,” Wyckoff said. “I had done rowing in the past and fell in love with it because of how unique it was. I wanted to share it with kids in the area.” Wyckoff also said that the sport is unlike any other sport: “We all have to work in unison unlike other sports where you can have ball hog or a team scorer, we all have to work together at the same rate to succeed.”

Janac was asked by Amelia to help out with the team due to her prior relationship with rowing. “Amelia had asked me to go rowing with her one day. I was pretty familiar with the sport because rowing is pretty competitive in Pittsburgh where I lived for a little bit so I thought I would give it a try. From there I loved how good of a workout it is and how different it was from anything else I’ve ever done,” Janac said. With rowing, it is hard for the school to put money towards it due to the lack of water nearby. Transportation would cost a lot of money as well as the boats. Both girls have raised all the money for the club and started a board.

Both Janac and Wyckoff are in their junior year and want the club to keep on going after they graduate. “I hope it grows because State College has so many amazing athletics to offer,” Janac said. “Our coach once said something along the lines of ‘nobody is born talented at rowing, it’s all about the hard work.’ We have so many amazingly talented athletes here that are willing to work hard, so I think State College will be represented really well competing and racing as we grow as a club.”

John O’Brien, former Penn State Rower and now Penn State Rowing coach, is now the coach of the new State College Girls Rowing Team. He has taken time out of his personal life to help contribute to the team. Wyckoff and Janac are hoping to have the team grow and stay constant even after they graduate. The State College Rowing Team is another outlet for staying active and being part of a team at State High.