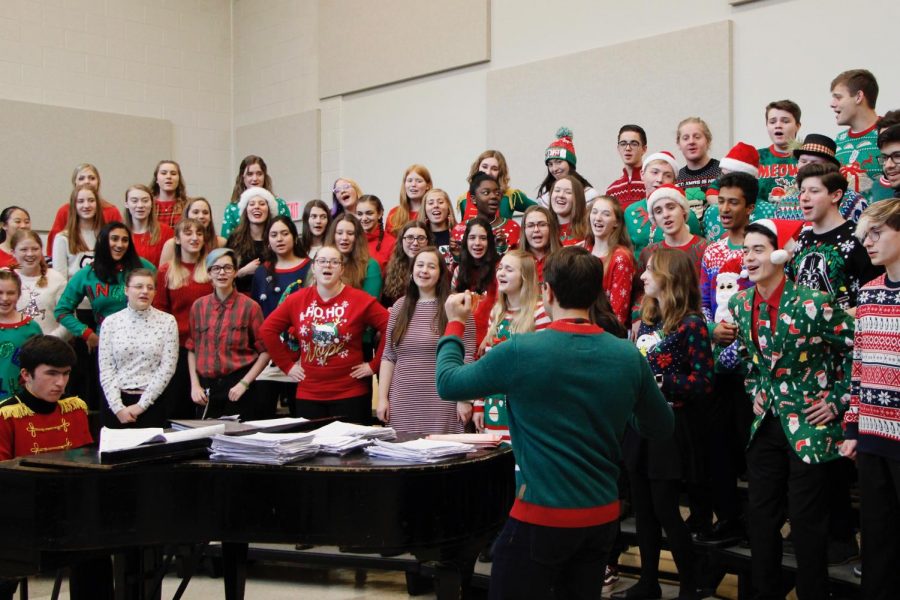 Anna Farris, junior, is in both Master Singers and Chamber Singers.  “It was really cool because I never get to see those groups and I also didn’t realize how many people in choir are also in band and orchestra,” Farris said. “It was really nice to see how musical a lot of the people I know are.”

Will Hurtz, senior, is a member of Chamber Singers, OMA, Master Singers, Symphonic Band, and Symphony Orchestra. “It was really cool,” Hurtz said. “I was pushing for this concert last year because band and orchestra don’t really do that much during the winter after their fall concert.  I thought it was really cool to see all these different music kids talking, especially orchestra, because often times orchestra kids can feel isolated from other band and choir kids.”

“I think it’s a great first step to the future of how concerts can be in our school.”

Students arrived at 2:00 p.m. decked out in all kinds of holiday attire, primarily tacky Christmas sweaters, hats, slippers, etc. As each group congregated, sharing words of excitement and spreading holiday cheer, sweaters were complimented and Christmas songs were danced to.

“We all wear fun holiday sweaters and it’s such a special time for all of us,” Farris said. “We all are able to celebrate together and it’s so cool.”

“There are a lot of recognizable tunes at this concert, which doesn’t happen too often with other concerts,” Hurtz said. “I think more people can enjoy songs at this concert.”

The concert commenced with the combined bands conducted by Paul Leskowicz. They began their performance with the cheerful and bright “Sleigh Ride” by Leroy Anderson.  The 10th Grade Band and Concert Band followed with a slower, yet beautiful, “In The Bleak Midwinter” by Gustav Holst. The last band to perform was the Symphonic Band.  They finished with a more intense piece, “Russian Christmas Music” by Alfred Reed.

“I think Hodie Christus Natus Est was my favorite piece from this concert,” Farris said. “It’s really challenging and rewarding to perform.”

The next to perform was the Combined Choirs of Master Singers, Cecilian Singers, OMA, and Sophomore Choir, conducted by Erik Clayton and student-teacher Marissa Works. They began with a beautiful performance of “Greensleeves” arranged by Bob Chilcott, followed by a more intense piece titled “Y’usum Midbar” arranged by Alice Parker, and a classic holiday song, “Charlie Brown Christmas” arranged by Zegree. They finished their performance with the fun and cheerful “All I Want for Christmas Is You” arranged by Mac Huff.

A Wind Quintet followed the Choirs with more songs to celebrate the season.

“We closed the concert with The Polar Express medley and it wasn’t my favorite song going into the concert, but after the concert, it felt really cool,” Hurtz said. “It was really big for both the band and the orchestra and really connected with the audience well.”