Keep Your Eyes On The Pool And Off Our Swimsuits 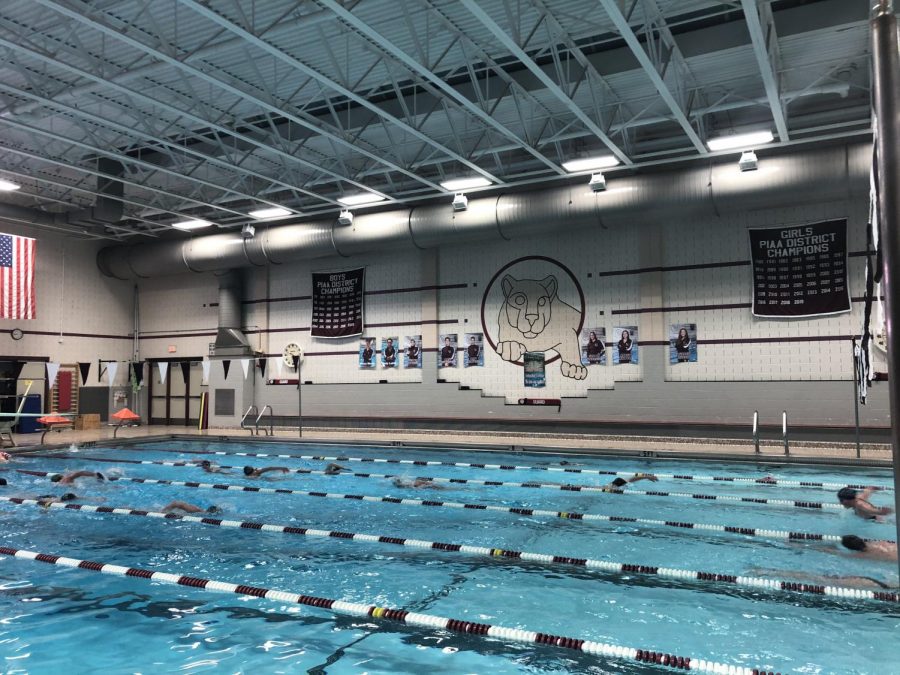 In recent weeks, an outdated and subjective PIAA rule has been used to encourage body shaming high school swimmers.

As a captain of the State College Girls Swimming and Diving team going into my fourth season, I have spent countless hours of my time throughout high school in the pool, dedicated to improving as an athlete. Recently, the athletic accomplishments of my team have been threatened by a sexist rule that encourages objectifying the bodies of female athletes.

At a practice right after a meet during my junior year season, one of the team’s female assistant coaches pulled all of the girls out of the water and informed us of a conversation she had with a PIAA official at the meet the night before. Some of the girls on the team, myself included, were wearing older versions of our team suit which had a less restrictive back, making it more comfortable for our body types. According to the official, those suits were in violation of the National Federation of State High School Associations (NFHS) swimsuit coverage regulations which state that “A competitor shall not be permitted to participate wearing a suit that is not of decent appearance… Females shall wear suits which cover the buttocks and breasts…” Apparently, our suits did not have sufficient butt coverage according to the particular official’s interpretation of the rule, and if we continued to wear them, our team would be disqualified. My teammates and I were outraged upon hearing the subjective nature of this rule and were equally distraught to find out that there was a regulation in place actively encouraging officials to look at the butts of female high school athletes while they are on the block before a race. Somewhat reluctantly, we silenced our concerns and continued on with our season wearing the other team suit that was not criticized.

Just this past September, in Alaska, a 17-year-old high school swimmer named Breckynn Willis was disqualified from a meet, because according to an official, her swimsuit had shifted to reveal too much of her backside. When I first saw the headlines of the story, I was shocked. It was all too similar to what my team had faced last season, only with more severe consequences. I followed the story as it made national headlines and was relieved to hear that her disqualification was overruled and her school district was appealing to Alaska’s version of PIAA to have the swimsuit coverage rule suspended.

Following the scandal that raised a national outcry, I worked carefully with one of the team’s assistant coaches to pick out team suits for the year that would in no way have any possibility of being deemed too revealing, at the expense of our comfort. We were sure there would be no issue, until our first meet of the season at Mifflin County on December 12th. In the meeting with captains, coaches, and officials before the start of the meet, my co-captains and I were informed that a number of our female teammates were violating the controversial rule and had to fix the violations before the start of the meet. Our male head coach was asked to check the appropriateness of our suits, however, he designated that job to a female assistant. We were outraged to hear the issues with our suits.

“If PIAA doesn’t want our swimsuits to be a distraction because they’re inappropriate, then they should never ask young girls to have their suits inspected by their male coach,” junior swimmer Megan Doucette said. Her concerns resonated with the whole team; our coach made the right call in not inspecting our suits for himself, and the only thing inappropriate that occurred that night was the official thinking it would be okay for a male coach to look at the butts of his female swimmers. In no way should that ever be something that PIAA or NFHS encourages. Officials and coaches need to keep their eyes on the pool, and not our bodies.

Even if the officials had not asked a male coach to check our suits, the criticism of our suits is still an issue to me. For one, the diagram used by NFHS to determine appropriate suit coverage is out of date. The female suit example is old fashioned and the lines describing where the suit must cover are ambiguous and subject to personal opinion. If there are to be any regulations regarding the butt coverage with swimsuits–although quite frankly I don’t think there should be–it needs to be clearly defined and not at all debatable.

Even more concerning, each girl on our team was wearing the same suit with conservative coverage; to say that only some people were in violation of the rule is clearly biased against certain body types. Not every suit fits every person the same way, and penalizing girls for having a specific body type is absolutely unfair. We can’t control how the suits fit our bodies and we can’t control what each individual deems as “inappropriate,” a highly subjective term. The rule punishes curvier athletes and encourages body shaming, not to mention the obvious concern about having female athletes’ butts being the subject of attention by officials at a high school sporting event. Following the official’s comments about how our standard team suits were fitting our bodies, my teammates and I were all deeply concerned about the message it sends young athletes about what their bodies should look like.

“Not every body is the same and by saying that [a swimsuit] has to fit the same way on everyone is once again spreading the message [that] there is only one ideal body type,” freshman swimmer Meredith Sulman said. Regulations like this can have detrimental effects on the body image of young athletes and encourage the toxic mindset that every woman has to look the same and be perfectly shaped. Each and every member of the swimming and diving team is incredibly athletic and there should be no reason why our body types are objectified or criticized like this. Sexist rules that end up targeting specific female body types should have no place in high school sports. Rather than criticizing young female athletes for how a swimsuit fits on them, the NFHS, PIAA, athletic department, and officials should be encouraging swimmers and divers to feel proud of our strength as athletes, and nothing more.