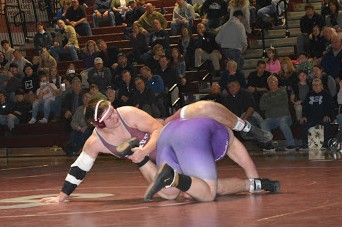 Junior Harrison Schoen grapples with his opponent in the 285 lb weight class in Thursday’s home meet against Mifflin County. State High lost the match 36-29 despite mounting a comeback after being down 29 points at intermission. “We lost, but our guys wrestled their hearts out,” sophomore Luke Banker said.

After beginning the season 2-0, the State College Little Lions Varsity Wrestlers took a tough loss on Thursday, December 19, losing 36-29 to Mifflin County. Mifflin County’s varsity team, ranked 21st in the state according to PA Power Wrestling, is a reigning state qualifier and is led by Nicholas Allison, the number one ranked wrestler in the state. The Huskies have been one of State High’s biggest and strongest rivals for the past several years. They showed this on Thursday, improving to 5-0 over the last five showdowns with State High.

Before the varsity match, State High’s junior varsity team defeated their opponent with a score of 60-24. Varsity exhibition matches featured Michael McShea, Jack Lamotta, and Braden Newby. The competition against Mifflin County was a STATEMENT match, meaning that Little Lion youth wrestlers were in attendance and competed in exhibition matches during intermission.

The first half of the match went abysmally for State High. The athletes trailed into the wrestling room at intermission with the score at 0-29, in favor of the visitors.

“They’re not wrestling the way they should be wrestling or the way they are capable of wrestling,” Coach Ryan Cummins said during intermission. “We allowed ourselves to lose a couple matches and it seems like the other guys are packing it in. I expect them to go out there and hit their offense and work hard and go for the win every time, not stand around.” Jason Dry led off the meet by getting pinned, and both Lance Urbas and Harrison Schoen followed suit shortly after.

Urbas, younger brother of recent State High graduate and two-time State medalist Cole Urbas, left both his teammates and the crowd shocked, getting pinned after a mere 41 seconds. This was the first time Urbas had been pinned this season. Ty Price and Tate McLaughlin, one of the Little Lions’ captains, each lost their matches as well.

“I got out there and I was feeling pretty good but I wasn’t able to execute what I wanted to execute,” McLaughlin said. “I’ve known [my opponent] for a few years. He and I have gone back and forth in matches and he just came out on top this time.”

Six more Little Lion wrestlers dueled it out with their Husky adversaries after intermission, including Clayton Leidy, Luke Weaver, and the Weaverling brothers, freshman Carter Weaverling and junior Bailey Weaverling. While State High mounted a significant comeback, gaining two forfeits and three straight wins, it was not enough to break their losing streak against Mifflin County. Kyle Martin lost the penultimate match 0-7, bringing the score to 23-36.

“We lost, but our guys wrestled their hearts out,” sophomore Luke Banker said. In the last match of the night, sophomore Ben Stroschein made his first varsity start. In the second period, Strochein trailed 3-4, but turned and pinned his opponent for the win. “We went absolutely nuts!” Banker said.

Next up for the Little Lion wrestlers is the Governor Mifflin Holiday Tournament over winter break and the final home meet of the season on January 7th against Chambersburg. Senior night will take place on the 7th and, in addition to the recognition of the senior members of the team, the match will feature a t-shirt giveaway and the infamous annual push-up contest. While the home meet against Mifflin County was not the strongest showing, the athletes still have time to finish the season on a good note.