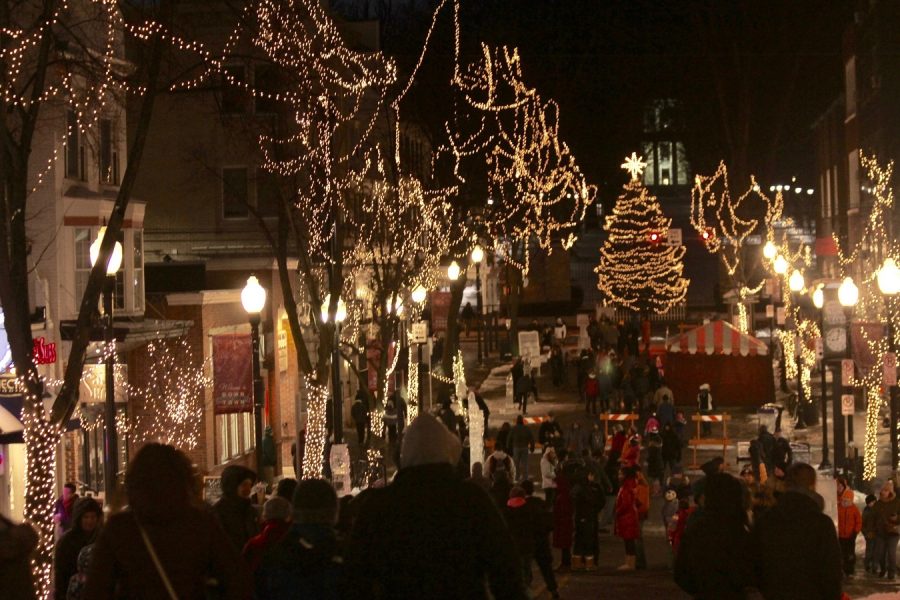 Streets are lit up by lights hanging on trees while event goers walked the streets and admired ice sculptures and other activities. First Night is an annual event that takes place on New Year's Eve.

For many people, ringing in the New Year is a celebration that involves lots of partying and looking back on the previous year. For many State College residents, First Night, an event put on by the Central Pennsylvania Festival of the Arts, is one of the best ways to enjoy New Year’s Eve. First Night started in 1994 and takes place in downtown State College. Now in its 26th year, First Night continues to improve and grow as the years progress. The event started at 10 a.m. and lasted until midnight, which allowed attendees to stop by and enjoy the event whenever they wanted. The event featured a variety of art, including music, theatre, comedy, and lots of ice sculptures. One of the reasons First Night is so beloved is because it is a family-friendly event that all ages can enjoy.

“It was very nostalgic to go back to First Night and experience my childhood again, even though I haven’t gone in a couple years,” sophomore Casey Higgins said.

Event-goers were able to purchase First Night buttons for the small price of $10, which gave them unlimited access to special events that required buttons to get into. Buttons were sold at various locations around downtown. Children under 12 could still get into button-only events for free if they were with an adult with a button.

Additionally, students at State High got to participate in First Night traditions. State High Thespians performed in the Prince and Princess Ball and also performed as “live mannequins.” The Prince and Princess Ball is a favorite event with kids, who enjoyed a theatrical performance of Disney songs with a storyline in addition to getting to meet the characters afterward.

“It was a fun and stressful experience to be a part of this,” freshman Olivia Biever, who played Elsa, said. “I just loved seeing the kids afterwards because their smiles made it worth it.”

Thespians also participated in “live mannequins,” which took place in the windows of Appalachian Outdoors. Students dressed up and got to model select clothes, but they had to act like a frozen mannequin while an audience gazed at them from the outside. One of the most challenging parts of being a mannequin was not moving under the watch of spectators.

Some fan-favorite events included the resolution mug workshop at 2000 degrees, the improv workshops put on by Happy Valley Improv, the 5k resolution run, the grand procession, ice skating at Pegula Ice Arena, a showing of The World Goes ‘Round put on by FUSE Productions, and the new hypnosis show. “I’d say my favorite part of First Night was the hypnotism,” Higgins said.

First Night is an annual event that is always very community-based and heartfelt with the people who attend it. While it’s a hit with families, it’s also a hit for many adults in State College. Big or small, it is incredible to come together and celebrate the new year.