Living with a Mental Illness 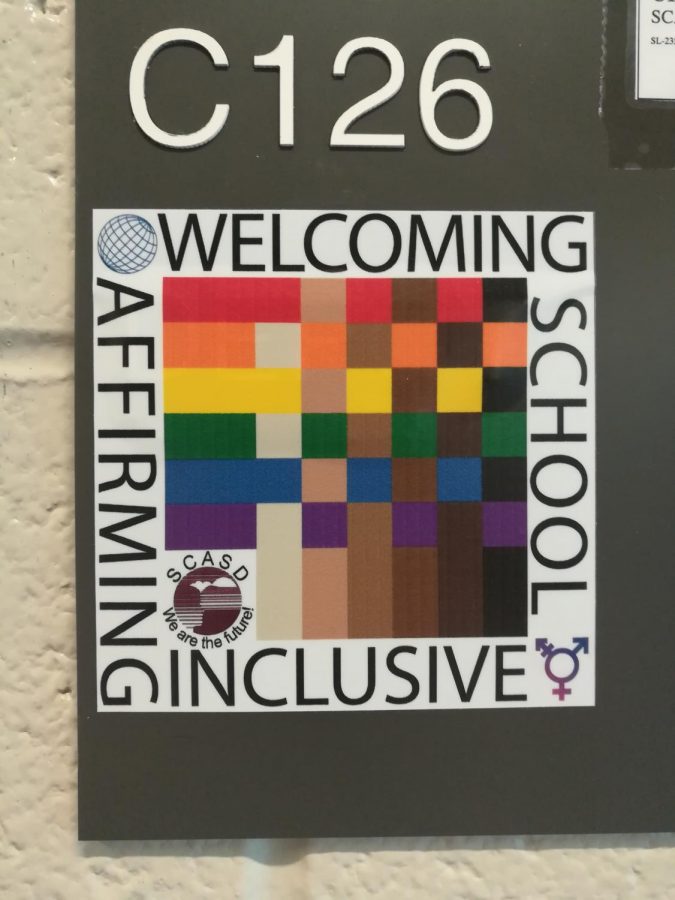 Inclusive signs on room numbers around the high school show State High's efforts to combat discrimination of any form, including mental illness ignorance and discrimination.

Mental illnesses are health conditions involving changes in emotion, thinking or behavior, or a combination of these. These conditions can affect someone’s ability to relate to others and function comfortably each day. They can affect anyone regardless of age, gender, race/ethnicity, socioeconomic status, or any other aspect of cultural identity. Research continually expands human understanding of how mental illness and the human brain work, and treatments are available to help people successfully manage mental health conditions. More frequent than cancer, diabetes, or heart disease, mental illnesses affect over 450 million people worldwide.

Some common mental illnesses include anxiety, depression, bipolar disorder, obsessive-compulsive disorder (OCD), post-traumatic stress disorder (PTSD), and schizophrenia. While there are a variety of resources available for those struggling with mental illnesses such as the ones listed above, the negative stigma surrounding mental health causes many to delay from pursuing them. Research at the University of Michigan found that at least one out of seven teenagers in the United States have a treatable mental health disorder. Although help is available, nearly half do not receive adequate treatment from a mental health professional.

“I think in general, people think that [mental health] easier to get rid of than physical illness, which is not necessarily true,” Hanna De Lorenzi, a senior at State High diagnosed with obsessive-compulsive disorder, said. “With OCD specifically, I think people think that it’s just people who really like to be clean and like everything to be a certain way, but that’s not what it is, even at all. That’s been made into a Hollywood thing that’s fun to watch and have as a character trait.” Dangerous stigmas and assumptions like these take away from personal experiences and have the potential to cause feelings of isolation and worsen a person’s mental health.

For people living with mental illnesses, being diagnosed is often an emotional experience. “I felt very mixed,” Rohith Kuchipudi, a senior at State High diagnosed with depression, said. “A part of me was sort of glad that well at least I knew what was happening, but at the same time, it felt a little bit scary because it’s such a defined thing at that point. There was a little bit of comfort, more than I had before where I was like, ‘Maybe this isn’t a big deal at all’, but when you know for sure, there is a little bit of fear, but ultimately it’s helpful.”

De Lorenzi’s experience was largely similar, echoing Kuchipudi’s thoughts. “I felt relieved,” she said. “I finally felt like there was something to call what I was, and I was like, ‘Oh, this makes sense now!’, but also sad because, well, now I have this thing that I have to deal with.” Although De Lorenzi and Kuchipudi experienced many emotions throughout their diagnoses, they both made sure to emphasize the importance and helpfulness of the moment and reaching out to professionals who have studied mental illnesses and know how best to help a person struggling with mental health. Mental health treatment options like counseling/therapy can help people have more control and a better quality of life.

Even with treatment, living with a mental illness through the ups and downs of daily life can often be hard. It is very important for people experiencing mental health issues to listen to their own needs. Some common tips for dealing with mental illness are to exercise and meditate, but Kuchipudi, from his personal experience, also suggests making an effort to stay engaged with past hobbies. “I realized I lost all of my hobbies once I started feeling that way,” he said. “I used to write and draw and play guitar and stuff, but for a good year, I didn’t do those things, and I felt miserable”. He further explained that although these hobbies will not “fix” the struggles that come from living with a mental illness, they can give people a creative outlet and help them engage with their lives more fully.

While both De Lorenzi and Kuchipudi have had their fair share of battles with OCD and depression, they agree that their experiences and treatments have made a significant impact on their view of life. “It’s given me lots of perspectives, because when things are difficult at school, when life is crazy, I know that it’s still really good in comparison to what it used to be,” she said. “Even the worst days now are better than the days when I was still not treated.”

In terms of before and after treatment, Kuchipudi also agrees on the change of perspective. “It’s taught me to not compare myself to other people,” Kuchipudi said. “It’s easy to say, ‘Well, that person doesn’t have depression, but I do’, but viewing it that way kind of sets yourself up for failure because obviously everyone has their own sets of problems.”

Mental illnesses are real and more common than discussed, and raising awareness for these conditions can break down obstacles and improve the chance of recovery for people struggling with them. For anyone suffering from a mental illness or knows a friend who is, please do seek help. Although reaching out may seem like a terrifying step, know that there are people in the world who want to help you find hope and purpose. Setting up meetings with your school counselors and talking to trusted adults and friends are great first steps. You are not alone. For further information on mental illnesses, the National Alliance on Mental Illness HelpLine can be reached from Monday through Friday, 10 am–6 pm, at 1-800-950-NAMI (6264) or through email at [email protected]