Senior Swim/Dive Night: A Celebration of Change and Legacy 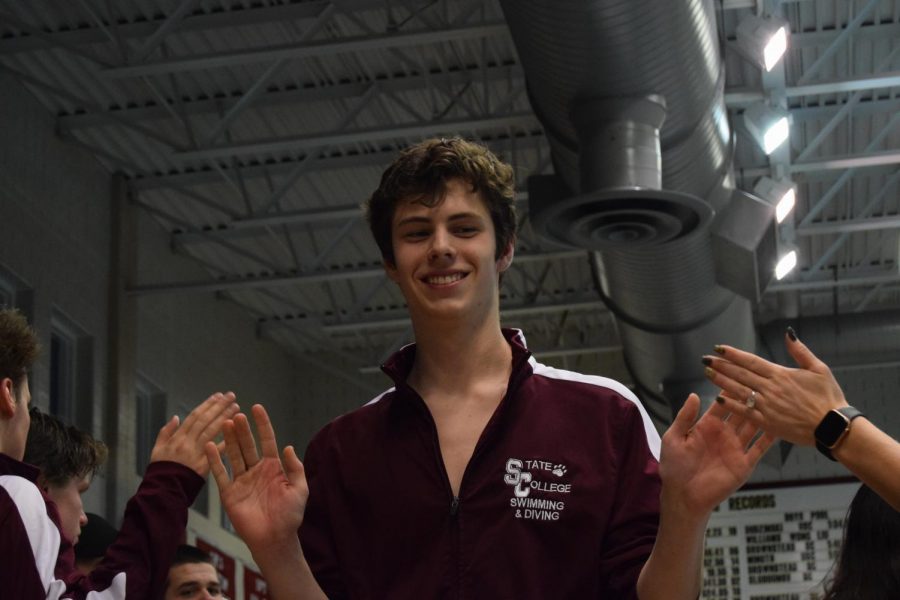 State College Diving senior Marcus Wheeler gives his teammates high fives in celebration of the Swimming/Diving Senior Night on January 23. Senior Night was created in recognition of the seniors who serve as captains, leaders, and role models on the team, and has become an annual holiday for State High Swimming and Diving. The night included a photo slideshow, videos, speeches, gifts, and snacks, all in honor of the team seniors. “The best part of being a senior this season has been getting to know the underclassmen that will become the future of the team. I'm glad I got to share this final year with my fellow seniors and it's incredible to see how far we've come,” Wheeler said.

On January 23, the sound of applause and cheers filled the State High natatorium as family and friends gathered to celebrate the seniors of the Swim and Dive Team, Sarah Ambrose, Marcus Wheeler, Aubrey Zuech, Matt Brownstead, Matthew Allgeier, Foster Heasley, and Andy Ladrido, at their annual senior night meet.

The senior festivities kicked off during the break before the diving events with the team gathered along the side of the pool, forming a tunnel filled with cheers, applause, and high-fives. Each senior was given a chance to walk through the tunnel while a bio of their accomplishments, goals, and post-highschool plans was read to the crowd. The celebration continued with a slideshow including pictures of each senior, starting in infanthood, and short interviews recounting their favorite swimming/diving memories.

For the seniors of the swim/dive teams, much has changed in their time as State High athletes. “Our whole team has seen a lot of change throughout the last four years, especially in our coaching staff,” said senior diver Marcus Wheeler. “Our first diving coach left at the end of our sophomore year, to be replaced by our current coach Whitney Dudek.” The swim team, too, has been in a state of almost constant change. With three head coaches in four years, and even more rotation of assistant coaches, the seniors of the swim team have had very few constants in their time on the team. Despite these rapid changes, swimmers and divers are still grateful for the difference their coaches made in the short time they have been at State High. “I’m really thankful that our team has had the opportunity to continue to compete for State High and it’s all thanks to [Dudek’s] dedication,” Wheeler said.

But the changes haven’t been all bad. In fact, change over the years allows for growth and improvement under the influence of each year’s unique captains. “I feel like each year is very different from the last because each group of seniors has different perspectives on how to help the team grow,” said Aubrey Zuech, a senior co-captain of the girls swim team. “Our main goal this year has been to make sure everyone on the team feels welcome and valued. It’s been surreal that this time has gone by so quickly and this is my last year on the team,” she continued.

The Swim/Dive Senior night continued with a special relay, involving all seniors on both the swimming and diving team. Participating in very different aspects of the same sport, the senior relay provided an opportunity for all students to do something they had never done before: swim together in the same pool. While a relay may be old hat to a swimmer, it is anything but comfortable for a diver. “I’ve never really been much of a swimmer, so being thrown into a relay with some of the fastest athletes on the team was an honor. I was surprised at just how tired I became after swimming just one lap, and it made me respect the amount of hard work and willpower it takes to race as a swimmer,” said Wheeler. “Swimming in the final relay was so much fun and afterwards, the team pushed the coaches into the pool and had fun going off the diving boards and swimming around,” Zuech added.

The night concluded with a reception held by the Swim/Dive Booster Club. With snacks and drinks on hand, each senior was gifted a maroon fleece blanket embroidered with the swimming/diving logo and their name. With the season drawing to a close, the seniors of State High swimming and diving have had a chance to reflect on both their four years on the team, and opportunity to serve as a role model within the team this year. “It’s been fun to be a senior on the team because you can work with the coaches and other seniors to make the swim team a fun and encouraging team for the freshman (and other underclassmen) to be apart of,” Zuech said.

“The best part of being a senior this season has been getting to know the underclassmen that will become the future of the team. I’m glad I got to share this final year with my fellow seniors and it’s incredible to see how far we’ve come,” Wheeler added.