Are Students More Stressed Than They Used to Be? 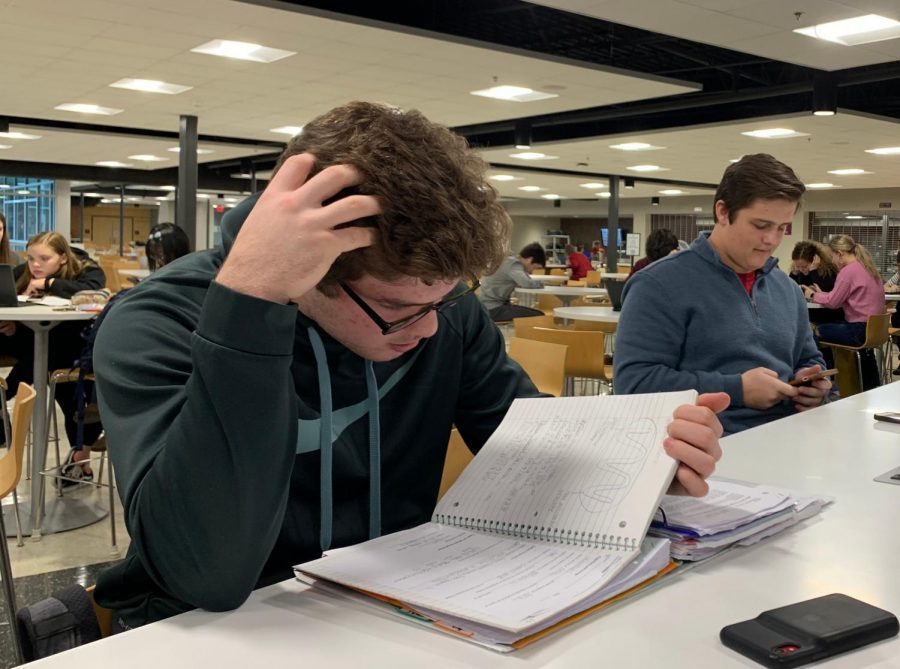 Between the encouragement to take a rigorous course load, study for the SAT or ACT, volunteer, and participate in clubs, sports, or honor societies all while aiming for eight hours of sleep, students nowadays seem like they’re more stressed than ever.

According to a Pew Research Center survey, seven out of ten teens think anxiety and depression are a major problem for their age group. 61 percent of teens surveyed said they felt “a lot of pressure” to get good grades.

Oftentimes, the dread of not getting into a choice college pushes students to take more challenging classes. State High offers a number of AP or advanced courses and varsity sports which some students say add to the stress.

Moreover, modern technology and increased access to computers has also increased the amount of work teachers assign, according to some students. Teachers “are able to give us more work on computers nowadays so if you miss school, you have no excuse,” Ryan Domico, sophomore, said.

Along with increased internet access, social media plays a large role in many students’ lives. Although scrolling through social media may seem like a relaxing activity to some, others see social media as an anxiety-inducing activity. Will Hurtz, senior, said the internet has allowed for school drama to spread to a wider audience instead of a small group of people.

“Much more drama can happen and be expressed over the internet while previously most school-related drama stayed within the school or smaller groups,” Hurtz said.

“Our generation is more constantly interconnected than any previous generation has been due to the explosions of social media and the power of texting.”

Similarly, Annie Gustafson, senior, said social media forces students to constantly update others on the happenings in their lives.

“With modern technology, cellphones, and social media, students are always ‘present’ to their peer group in one way or another,” Gustafson said. “In this way, I think there may be more stress to growing up right now, as you rarely get a true break from the outside world.”

According to Padt, constant interconnectedness through Instagram, Twitter, Snapchat or messages leads to harmful comparisons and contributes to what she called “stress culture.”

“There’s a lot more social pressure because of social media,” Padt said. “When people say ‘Oh my god, I’m so stressed,’ I feel like everybody goes along with that. And when you say it over and over, then you start to actually get stressed when you really shouldn’t be.”

However, there are countless counselors, teachers, and students at State High willing to help improve mental health, in addition to State High’s My Mental Health Matters Club. Increased academic demands do not always have to lead to increased stress when utilizing State High’s innumerable resources.