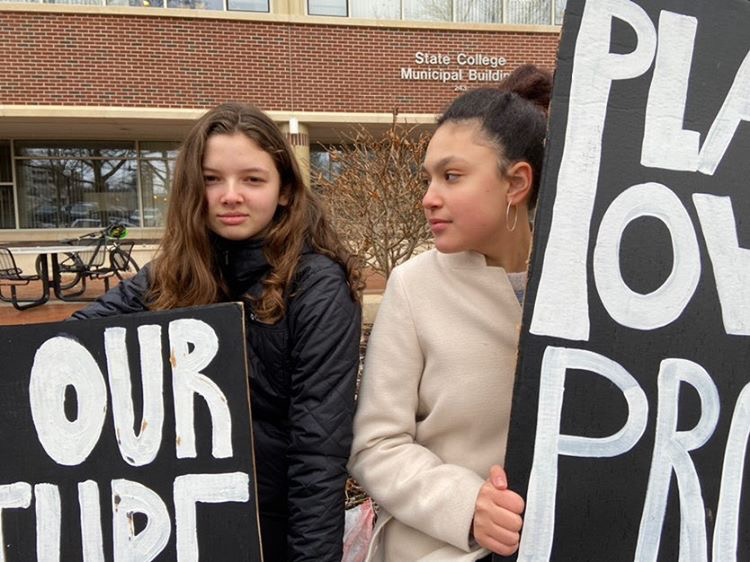 Two Delta students, Lena Logan Adams and Miranda Marks strike outside the Municipal Building on a Friday walkout. Even in cold weather, these girls leave school to make their beliefs heard.

For one hour every Friday, a small collection of teenagers will be found in front of the Municipal Building in downtown State College. With signs in hand, they stand outside, urging action on climate change.

Since the start of the 2019-2020 school year, roughly 15 people have been going to the Municipal Building to strike for climate justice. Climate justice is a term used for framing global warming as an ethical and political issue, rather than one that is purely environmental or physical in nature. These protests are attended by homeschooled and Delta students during the school day. Miranda Marks, a freshman at Delta Highschool and climate activist explain the process:

“We leave right at the end of second period and we get everyone together,” Marks said. “We have a bunch of people who volunteer to pick us up and drive us. The cars wait outside and we all go and jump in. They take us to the Municipal Building, but in the summer, we all bring our bikes to school, and then we bike there to lower our emissions. It’s called ‘a bike and strike,’ but for now, since it’s painfully cold, we drive.”

These weekly strikes are organized so that Delta students can attend without fear of repercussions, as they take place during lunch/free time, and Delta is an open campus. For larger, longer walkouts, skipping class cannot be avoided.

The goal of these protests includes educating the public and placing pressure on Penn State. “Obviously educating people is really important,” Marks said, “but there are specific things that we’re asking to get done. We want Penn State University to divest from their lines on the fossil fuel industry and we want the Green New Deal to be passed, which is a really important and influential bill.”

Marks has never been formally punished by her school for walkouts. She thinks that although her teachers are sympathetic to the cause, they don’t appreciate her missing class. “They definitely support us fighting for climate justice and they acknowledge it’s a really important thing to talk about and an important thing to fight for,” Marks said. “But they definitely don’t love me missing class. It’s not their favorite thing, although I do think that we have a lot more support in our school than in other schools.”

Delta has an open campus and a more lenient policy in terms of walkouts which make these events possible. However, at State High, the same cannot be said. In the student handbook, which can be found on State High’s website, it says: “Students are not to leave the property or school area once the school day has begun without following proper sign out procedures, they will be considered truant and receive a day of In-School Suspension. Students and their backpacks or personal belongings are also subject to a search when they leave school property without permission—including those going to the parking lot without permission.”

In addition to these policies which discourage students from walking out of school, those who oppose the idea of walkouts believe walkouts make no real change. Many see these protests as simply an excuse for students to skip class.

When looking to real-life examples for answers, walking out of school has a history of creating real change. The Birmingham Children’s Crusade was a major turning point for the civil rights movement in 1963, and, more recently, the Parkland shooting walkouts all over the country pushing for gun control sparked a whole new conversation for the U.S. Walkouts have been putting pressure on legislation to change for years, but on a smaller scale often they don’t receive the same response. While a small group of teenagers at the Municipal Building in downtown State College isn’t the same as a nationwide march, does it deserve the same respect?

“Protesting isn’t our first choice, but adults didn’t take care of our planet, and now we’re handed those mistakes,” Marks said. “People come up to us at our strikes and they insult us. They tell us the science isn’t real, or if we want change, this isn’t the way that we get it. A lot of people, I think, have expressed that they believe in climate change, but that striking is just a waste of time.”

These words haven’t discouraged Marks and her peers from continuing to make their voices heard. “We strike every Friday at the Municipal building which is 243 South Allen, from 12-1 p.m,” Marks said. “On April 22, there’s going to be a big strike on Earth Day. There’s going to be more information about that–that’s going to be for later.”