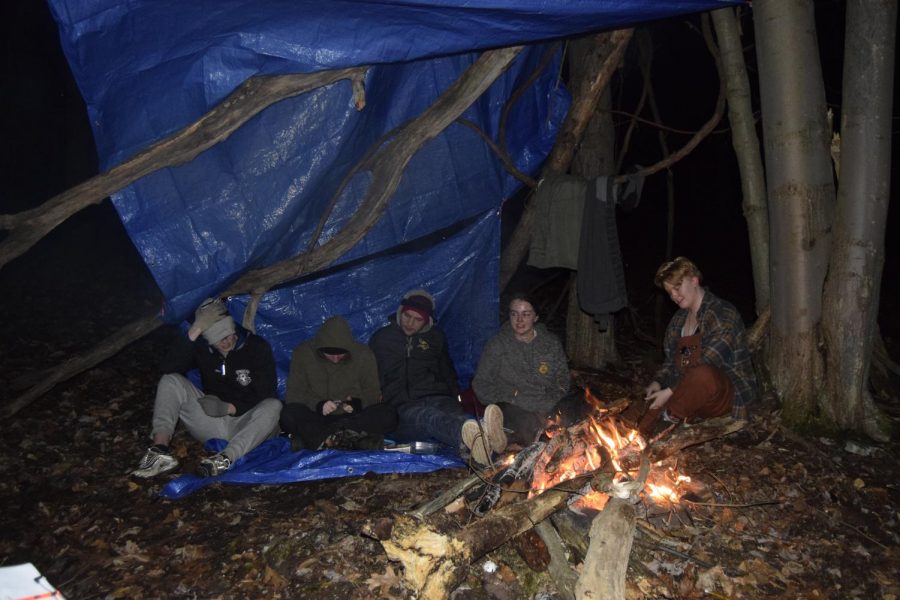 Students on the Survival Science Final Trip relax under their finished shelter after successfully starting a fire.

Humans are social creatures. In today’s world, when information is always readily available, people thrive off of contact and knowledge to connect with the world. So what happens when high schoolers are asked to leave their comfortable daily lives and technology and survive in a forest with limited resources? That is the question the Survivor Science class at State High, led by teacher Mr. Donoughe, set out to answer for their class final on Tuesday, January 14.

The group of about 30 students and teachers started the trip by traveling to a country club 45 minutes away from the school at noon. Because the 2019-2020 school year was the first year State High offered Survivor Science as a class, this trip marked a very important moment for students, giving them the chance to apply what they had learned from the class in a real-world setting. “I’m feeling great right now,” senior Ronit Patel said on the bus ride to the country club. “I think my group is very well prepared. We got the gear, and we got the clothing to take on these harsh conditions, and we got the longest hike but I think it’s going to be worth it, and I’m really excited.”

When the bus arrived at the location, students gathered the resources they were allowed to bring such as ziplock bags, firestarters, cans, tins, and small personal packages of first aid and other trinkets, and split into their assigned groups. Each item a group decided to bring docked a set number points on their final group grade, with students who survived on fewer or less advanced resources retaining the most points as a starting grade before the trip. Once each group was settled, they waited for their base assignments from Mr. Donoughe. As each group was called up, they were given an emergency radio, hatchets and bow saws (also items exchanged for points) and were shown on a map where their camp was located. After these directions, each group disappeared into the forest to find their camp location and complete their tasks for the night.

“We split the jobs,” junior Liam Jones said of his group. “Two of us are gonna be doing a shelter, a few of us are gonna do a fire, and honestly after we get a fire going, we’re good. We’ll eventually cook stuff. We have burgers.”

Once each team hiked to their camp locations, tarps were quickly secured on branches to make shelters. As the groups made their camp locations comfortable, they prepared for the biggest challenge ahead of them—starting and maintaining a fire. In higher stakes survival situations, failure to start a fire could lead to serious consequences. Fire is a crucial resource because it allows individuals to cook food, boil water from unclean sources, and have light and warmth as night falls. Because it was raining, the wet wood made starting a fire a much more difficult task, and groups struggled to find wood dry enough to light. After collecting a sizable pile of sticks and moss, rocks were cleared off to make a place for the fire. Groups began the fire by arranging small sticks in a triangular shape to create a base. Based on what materials each group had, they then either used matches or a firestarter to light their fire and then began feeding it to build a bigger fire.

By that point at night, the starving students were more than ready to prepare their food. Students had to get creative with cooking setups, using branches to hang tins over the fire to boil water and tin foil to wrap food that cooked directly in the fire. While all groups brought potatoes to bake and assorted meats like chicken breasts to cook, some groups even baked brownies and made tea and soup in an effort to impress the teachers and receive extra points. After shelters and food were prepared, the groups sat around the fire and passed the time in any way they could think of, talking, playing cards, and exploring the woods.

Once night fell, students were told to find their ways back to the starting point on their radios. Clean up began, and slowly, groups began emerging from the woods. After nearly an hour, all groups were accounted for and the bus made its way back to the school.

“[The most fun thing I did] was probably build a lean-to,” Jones said. “It had a roof and it was really big.” When asked about how he felt about the trip as a whole, Jones spoke for the whole group saying: “It was a lot more fun than I expected, and I would definitely recommend this experience to future students.”