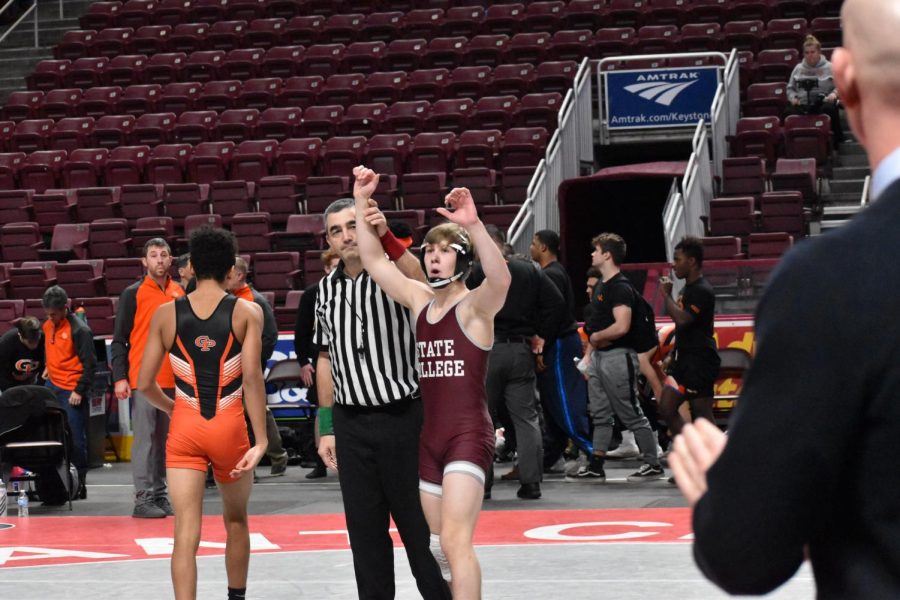 Freshman Eric Weaver celebrates after his win against Erie Cathedral Prep. Weaver pinned his opponent in the second period to give State College a 24-22 lead. “The wrestling team becomes your family,” Weaver said. “We pick on each other a lot but I know that we are all there and will support one another all the time.”

The last time State College Area High School reached the state tournament for wrestling duals was 2003. Seventeen years later, after upsetting Mifflin County in the District Championship on February 1, the Little Lions made their return to the state competition. State High lost to Mifflin County in a dual meet earlier this year, but were able to win when it counted, narrowly defeating their district rivals by one point.

The following Thursday, the 2020 PIAA Class AAA Duals began at Giant Center in Hershey, Pennsylvania, lasting until Saturday, February 8. State College placed in the top 13 (out of 20) teams in the state, with a record of 1-2. The Little Lions were knocked out of competition by Erie Cathedral Prep, who placed fourth overall in the competition.

In the first round of the State Championship on Thursday night, State High lost to the Seneca Valley Raiders by a score of 34-29. State High was pinned four times, including two in the last minute of the match, accounting for 24 of Seneca Valley’s total points. Junior Lance Urbas, competing in the 170 lb weight class, won by tech fall to bring the score within eight points, but juniors Ty Price and Nick Beebe were both pinned to put the victory out of reach for State College.

“I feel like we handled ourselves well and supported each other,” sophomore Luke Banker said. “The guys that wrestled really stepped up and showed heart.” State High bounced back with a defeat the next morning against Garnet Valley, as round two went much smoother for the Little Lions. Urbas, sophomore Harrison Hoopes, freshman Hayden Cunningham, and senior Clayton Leidy all pinned their opponents on the way to a 38-18 victory. Urbas jumped a weight class for his match, a move which allowed him to record a pin just 28 seconds into the first period. Cunningham’s match only lasted 14 seconds before reaching an identical result.

“The heart that our team had this year was really special,” senior Tate McLaughlin said. “Just the endless drive and intensity that the guys had all season, it showed a lot of heart that we didn’t really see last year.” In the second consolation round Friday evening, the Little Lions jumped out to an early 9-4 lead, with Hoopes, Urbas, and Price earning points for their team. However, three straight pins in the first period by the Ramblers made the score 22-12 in favor of Erie Cathedral Prep. Cunningham and fellow freshman Eric Weaver bounced back with two more consecutive pins, bringing State College back to a two-point lead. A major decision loss, a pin by junior Owen Woolcott, and a victory by Leidy made the score 33-25 in State High’s favor, but the Little Lions then suffered two consecutive pins, making the final score 37-31 and knocking them out of the tournament.

Despite the tough loss in Duals, the future of State College wrestling is bright. “We lose some talented guys and some leadership on our team, but we’ve got some great talent moving in and our team is pretty young already,” Banker said. “We’ll be dangerous for sure.”