Who Takes the Blame When College Reopenings Fail? 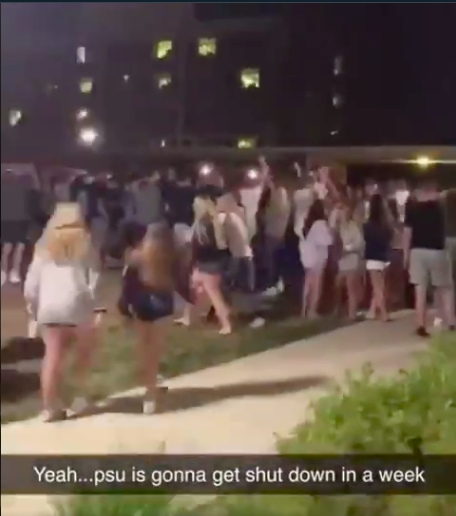 Penn State freshmen gather in large groups outside of East Halls on August 19, 2020. Despite the local town’s ordinance concerning large gatherings and required face coverings, students were found to be gathering in large groups without masks as soon as they returned to campus.

Hundreds of schools across the country have been welcoming students back to campus with open arms. At least, that was the plan. Within days of reopening, various institutions were trending on Twitter as countless students tested positive for COVID-19 and schools that had only just opened shut down. The near-instantaneous closure of schools begs the question: Were reopening plans doomed from the start? And who is to blame?

“I think college reopenings were absolutely doomed to fail,” State High junior Clarissa Theiss said. “There’s a very unique culture in college towns that promotes togetherness—partying, dorm life, group study sessions–and expecting students to give up that lifestyle is unreasonable. While upperclassmen should be held to a level of scrutiny and responsibility, I cannot imagine freshmen responding any differently than they have in past years. They’re essentially still teenagers, and when you pair that poor impulse control with months of being asked to stay inside, it’s this perfect storm.”

Perhaps the largest critique of university openings has been student behavior. With videos of students partying circulating across the internet, one thing has been made clear: the reopening of schools opens the doors to social behavior that completely disregards physical distancing. The general population and university administrations alike have been quick to drop the blame on students, saying they should’ve known better than to party. Yet when universities and the media criticize students for their behavior, they fail to look at the whole picture. For 5 months, these students were in social isolation. When placed in an environment abound with thousands of students, resisting temptation isn’t necessarily an easy task. Additionally, there’s no way of knowing for sure whether the spike in cases comes solely from the large parties being broadcast on the news.

“Parties definitely contributed to the shutdown of some colleges, but there is no way of knowing how many infections came from those gatherings and how many came from accidental interactions,” Penn State freshman Rena Li said. The spread of cases is not limited to large gatherings. It can occur in the hallways of a dorm or during a grocery-run, neither of which are socializing events.

This is not to say that students are absolved from irresponsible behavior. Adherence to safety protocols is necessary on the students’ part to slow the spread of COVID, but even strict adherence to such rules is not a surefire way of preventing the spread. Controlling the cases on a large campus such as Penn State can prove to be difficult if the reopening procedure is not thought through carefully. Just from Friday, August 28, to Monday, September 1, 32 Penn State students tested positive for COVID-19.

“As a college that has a reputation for infamous events and gatherings that make the national news, Penn State should’ve taken their decision to reopen more seriously. The few safety measures they currently have are proving unsuitable for what they are currently dealing with, and will only yield more disastrous effects,” Li said.

The reopening of Penn State was a decision criticized by many. Hundreds of professors and graduate students alike signed an open letter to the administration expressing their frustrations about Penn State’s reopening plan. Penn State has yet to address the safety concerns listed in the letter.

Prior to reopening, Penn State sent out a survey to students in hopes of gathering information on their perceptions of reopening. In the survey, 20% of students said that they would not wear masks. Despite having this information in hand, Penn State pushed for reopening. And while masks are now required for students and faculty while on campus, there is no feasible way Penn State can monitor thousands of students while they’re either on or off-campus.

At the end of the day, no single party can take the blame for the spread in cases after colleges reopen. Such a spread is enabled by student behavior and lack of foresight on the university’s behalf. Despite being aware that many students would be unwilling to change their behavior, the administration made the choice to reopen.

“All students should be held accountable along with the universities themselves,” Li said. “Colleges should have rethought their opening plans based on the size and locations of campuses. No matter how much faith you have in humanity, gathering a large number of people together in any sort of space is dangerous during this time, because there will always be accidents and people who break the rules.”

The facts of the matter remain: Colleges are reopening, students are returning to campus, and on large campuses, a rise in cases is inevitable once students return. Reopening plans have yet to have a 100% success rate, and in a pandemic where just a single asymptomatic carrier can spread the virus and cause countless others to be infected, a 100% success rate is necessary. While students must be held accountable for their lack of personal responsibility, administration must also be held accountable for their decision to reopen in the first place.