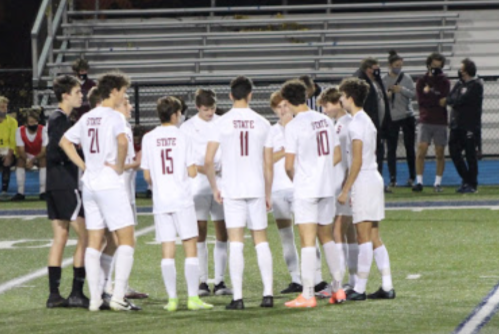 During the first half of the Altoona game, State College was losing by one, but the boys were able to score two goals before the end of the game, winning the game. Senior Jake Jeffries scored goal number one, tying Altoona, and senior Owen Hollobaugh scored goal number two, taking the lead. Both were assisted by junior Davis Pagett, and the power of these three helped the team to become District 6 championships.

“After what happened last year with Altoona, it was refreshing to beat them in districts this year.  I am looking forward to seeing what the state playoffs has for us,” senior Grady Ballard expressed.

Following Wednesday’s game, State College took on Erie McDowell in the first round of the PIAA state playoffs. During this game, goalkeepers Sasha Mohoruk and Matt Staniar did not allow any goals, even with a total of eight shots made during the first half and during the shootout in overtime.

With a 0-0 score held past regulation and overtime, the game depended on a shootout, which would be determined by the team who made the best of five free kicks. State College ended up scoring four goals compared to the two goals Erie McDowell scored.

Mohoruk blocked the first shot from McDowell, giving State College a chance to take the lead. Junior Quinn Murphy took the first shot for State College, sinking the ball into the bottom left of the net. Murphy’s goal was followed up with a goal from Zachary Salmon of McDowell, tying the game 1-1. Ballard then sunk a goal for State College in the right post, making the score 2-1.  To tie the game for McDowell, Damon Henderson sunk a shot to the left, making the score 2-2.  Pagett took the lead with his shot at the top right corner of the goal. McDowell kicked what would end up being their last shot, and Mohoruk made an incredible diving block, keeping State College in the lead 3-2. State High junior Carson Litzinger finished the game with a rocket into the left side of the post, winning the game 4-2.

“I have never played in a game like this before. It was an intense game that went down to overtime penalty kicks. This will be a game I remember,” Mohoruk said.

State College hopes to keep their streak alive and will continue to play against the other final seven teams in the state playoffs in upcoming weeks. Their next game will be played Saturday, Nov. 14, and the team will compete for a spot in the state championship quarter-finals.