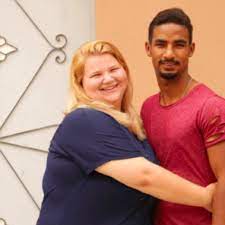 TLC's Nicole and Azan on 90 Day Fiance are the personification of dysfunctionality in relationships. Pictured on the left is a grinning Nicole. On the right, a self-loathing Azan.

Certainly, you’re here right now not because you accidentally clicked on this article but because you read the previous part of this series and were just so eager to learn more about 90 Day Fiance. Well, I never disappoint.

So here it is. A summary of my favorite couple in the show and a cautionary tale to never end up like them.

Nicole Nafziger and Azan Tefou: Nothing I say could possibly better summarize this couple than this image right here. They should have this in textbooks because, in this very picture, you are witnessing history. The most awkward, one-sided hug the world has ever seen. Nicole, pictured on the left, smiles open-mouthed with her arms around Azan, who simply stands there, clearly uncomfortable with what appears to be a scowl on his face. Together, this dynamic duo serves as possibly the most dysfunctional couple on 90 Day Fiance. Unsurprisingly, they are also the only couple in the entire show that turns up in multiple seasons. With quotes such as “You’re my Arabian prince,” “Physically, I’m attracted to Nicole..but, it’s just like, for example, 55%,“ and “Before I cheated on him, things were amazing. After I cheated, it changed…I don’t know why,” who can blame TLC for milking all that they can out of these two?

There’s no doubt that this couple displays some of the most toxic characteristics possible. Within their two seasons, Nicole found herself with no choice but to cheat on Azan several times because, she stated, they were long-distance. Azan found himself cheating back on her for revenge, laughing maniacally in a rather unsettling scene when caught. Of course, the numerous instances of learning about their partner’s infidelity and the shouting matches in the street square that followed led to quite the spectacle for passerby in Azan’s neighborhood.

Though this drama between them offers TLC the explosive reality TV scenes they need to garner views, there are other, far more pressing problems that they depict that go beyond this couple and yet are largely left unaddressed throughout the show. Particularly, the fact that Nicole has a toddler named May. Aside from coaxing May into calling Azan “Daddy” within a couple of weeks of the two dating (which she’s done before with a previous partner, and cited that it caused issues for her child), traipsing across the country with her child for a man that she’s only met once before and who very clearly does not love her, Nicole often leaves May unattended at Azan’s home in Morocco while they go on dates together.

The effects of this are evident: during their stay in Morocco, Nicole complains of May throwing endless tantrums every day, refusing to eat or communicate with anyone. Rather than recognizing that this is likely a byproduct of homesickness, neglect, and her own parental irresponsibility, Nicole is seen snapping at May several times, arguing with her endlessly (a child that cannot formulate any response back), and eventually giving up to instead argue with her fiance.It’s one thing to witness two adults (despite their lack of maturity) finding their way to never be near each other again, but situations like these carry a very real level of gravity when innocent children are forced to be involved.

Though it may seem like just another reality tv show, 90 Day Fiance offers viewers the opportunity to witness a world that most probably could not even imagine, and a chance to dissect some of the broader issues deep rooted in our society—through, of course, the most ridiculous characters and their bizarre decisions.

Speaking of ridiculous characters–part 3 of 90 Day Fiance: A Series will follow the relationship of 48 year old David from Illinois, Kentucky, and 24 year old Annie, from Beung Kan, Thailand.