What it Means to be a Teacher 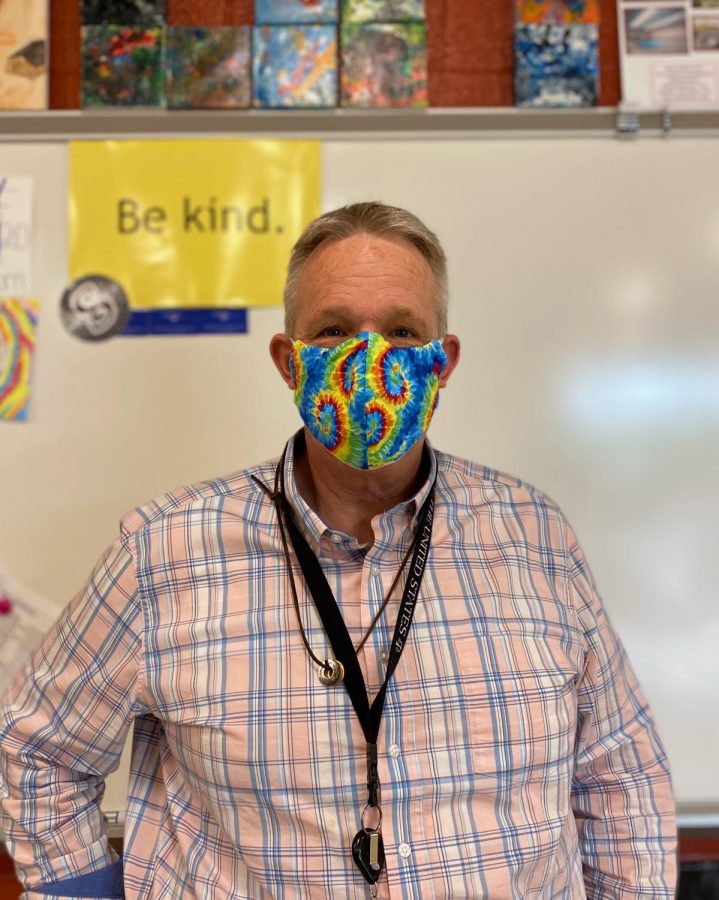 Andrew Merritt standing in front of a “Be kind” poster in his classroom on Wednesday, Jun. 2. He often repeats that his most important rule in the classroom is simply to be kind.

Since arriving at the high school in 2002, Merritt has taught AP US History, Democracy in Action, Problems with Democracy, AP US Government, AP Comparative Government, CP US History, and Current Issues. Before that, Merritt taught eighth-grade history and US Government related classes for about seven years. However, he didn’t always want to be a teacher. Merritt spent five years in the army, but has always enjoyed working with younger people, whether it was coaching the baseball team or teaching at a juvenile prison. In fact, for a while, he entertained the possibility of being a lawyer or even a minister, something that might surprise those who know him well.

“Teaching is kind of like ministering, just with education. You’re just teaching other things,” he said.

When he had first started teaching in 1990, in Horseheads, New York, Merritt found himself questioning if teaching was right for him. He came home from school one day after about two weeks in and felt the weight of uncertainty and failure.

“I was like, ‘I don’t wanna be a teacher. I’m not good at this, I don’t know what I’m doing,’” Merritt recalled. “I remember it was a Friday, I was sitting on my front porch, I had a small little house in Meyer, New York, and I was thinking, ‘I have to tell my principal I’m gonna quit. How do I do it?”

Then, he checked his mail. That past summer, Merritt had worked and taught at a prison for juveniles, and he found a letter from one of the students he had taught. After briefly wondering how the kid had found his address, he began to read.

“He went on and on about how the summer helped him become a better human being. Then he said that what me and another teacher had taught him was that teaching is not about learning facts and dates, it’s not about memorization, it’s just about trying to make people better. Trying to push them to be better people who learn because learning is important. He said he finally understood that, and that he was going to go back to high school, he was going to graduate, he was going to be an engineer. And so I thought, ‘okay, maybe I’m doing something right?’”

One of the parts of teaching Merritt dislikes the most is formal grading. He believes that in just a minute-long conversation, you can find out what a student knows and if they know enough. The system of formal grading doesn’t leave a lot of room for other ways of finding out what students know. Since the pandemic has started, Merritt’s teaching style has generally stayed the same, but if anything, has become far more flexible.

This year also made things more difficult for everyone involved, something many teachers had to understand in order to get the full picture.

“Some kids, when they’re home, they’re babysitting their brothers and sisters when they’re doing this. They’re working a full-time job at home making sure their four-year-old brother isn’t sticking a fork in the electrical socket, and at the same time they’re trying to learn because their dad had to go to work. And so, it made me more aware of their conditions. Not everybody is at the same starting point. Not everybody has the same stuff. That’s a good thing to constantly remember. Not everybody has what I have,” Merritt said.

This was important to keep in mind while navigating the many frustrations of online teaching. For him, like many teachers, getting students engaged and participating through a screen was no easy task. For Merritt personally, it was easier to do all online or all in-person teaching. He found the hybrid system to be hard to balance. However, it turned out to be the best way to go forward this year because of what he calls the “intangible things.” The intangibles of you as a human being able to see people and maybe sit close to them at a table. The intangibles of talking about your birthday party or a new movie with classmates for a few minutes.

For someone leading classes that are inherently political, the BLM movement, presidential election, capitol insurrection, worldwide pandemic, impeachment, and global issues this year all had to be handled in the classroom. During class, Merritt tries to hear both sides, if there are both sides. He tries to bring up both sides because he thinks it’s important to hear differing opinions and disagree with each other.

“My rule, as a teacher, is to deal with facts,” Merritt said. “I try to find that middle ground, and for me at least, it’s more about trying to make kids examine who they are and what they believe as opposed to what I believe. As a teacher, my job is not to tell you what I think, my job is to make you understand what you think.”

“I think what public school does and what especially college does is that it removes us from our safe little cave that we lived in at home and thrusts you into new situations. That’s what college and school do for us, it opens up our worlds. Your parents want you to think one way, but when you go to public school, you’re going to be hit with other ideas. For me, it was the army. I was in basic training with a gang member, he was a really nice guy, but everyone was afraid of him. A gang member from Chicago. And he would tell us stories, he had brands on his arms for the gang, they branded him. He would talk about what his life was like, and I was like, ‘oh my god, I’m a white guy from upstate New York in a little town with two parents and this guy is telling me about having to steal so he could feed his little brother.’”

It’s these intangible lessons we learn from human connection that make a true education. You can’t reduce what it means to grow down to a multiple-choice bubble or a number on a screen. Teaching, for Mr. Merritt, is always about something more.