State High Football Dominates the First Game of the Season 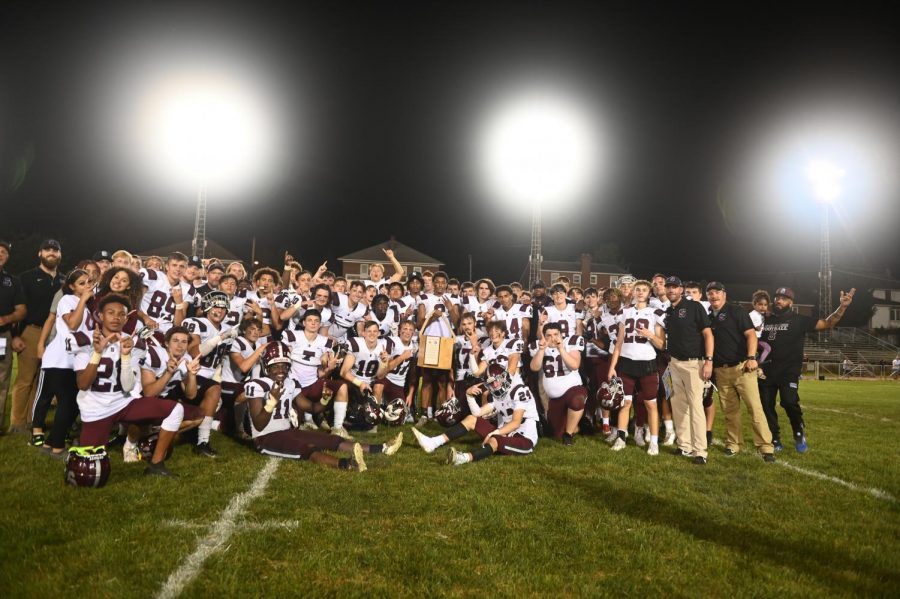 The State High football team poses with the Seven Mountains Bucket Trophy. The trophy is a seven sided bucket, and each side is made from a different wood harvested from the mountain that separates the two schools.

State High football is back, starting the season off with a raging victory over Mifflin County High School this past Friday, Aug. 27, ending the game with a score of 51-6.

“We’re gonna be playing a lot of tough competition through the Mid-Penn Conference this year, so the 51-6 [win] is a great confidence builder for the team,” said junior Lake Blake, a newcomer to the team this year.

The game started off with an opening touchdown, thrown by quarterback Finn Furmanek, junior at State High, to slotback TJ Yoder, senior at State High. This was followed by a 26-yard field goal from kicker Quinn Murphy, and to end the first quarter, Branden Price ran in a touchdown coming off of a punt return. The team entered the second quarter up with a score of 24-0, and Murphy was able to extend that lead with another field goal, giving the Little Lions a score of 31-0 at halftime.

The team was largely driven by State High’s own mantra, Stand Together Achieve Through Effort.

The score held steady throughout the third quarter, ending with a rushed in touchdown, by Furmanek, during the last seconds of the third quarter. The fourth quarter saw two touchdowns, one by Sophomore Owen Yerka and one by newcomer Ty Salazer.

The team is already looking past their victory. Despite their success, Black says there were, “a lot of things that were sloppy that we can clean up. This game is a great opportunity to sharpen our skills and become more connected as a unit.”

The team is set to play Downingtown East this Friday, Sept. 3, at Memorial Field; it will be the team’s first home game of the season.