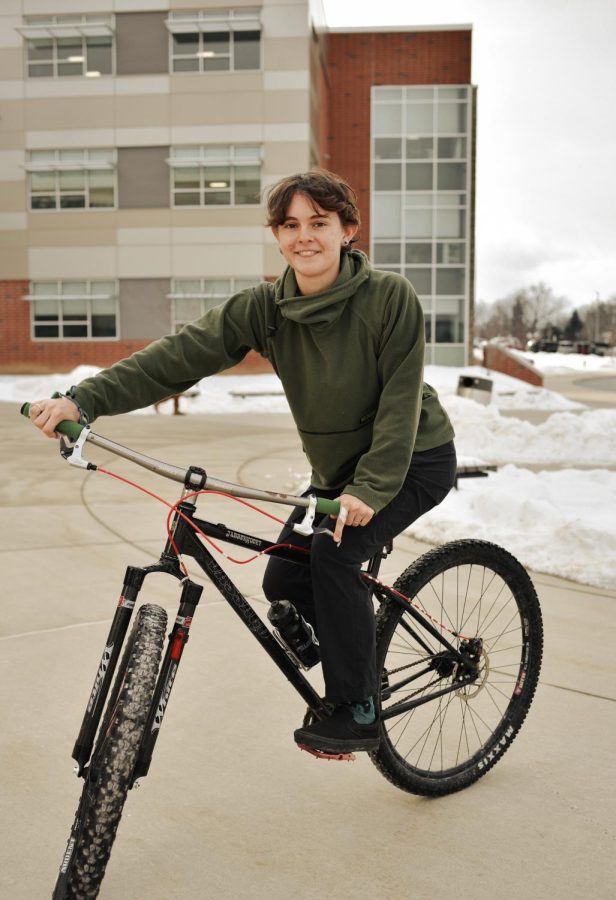 “My parents biked a lot in college, but then when they had my older sibling and I, they kind of stopped, with work and everything. And then, when I was in third or fourth grade, my older sibling Linus started mountain biking again and started working at the local bike shop, and my parents sort of started getting into it. I didn’t really start biking until we moved to Spain together, and I got my very first new bike, which was really exciting. It got stolen, like a week after I got it, which was really sad, but then I got another one, so it was okay. We would just spend a lot of—I didn’t really have any friends—so we would spend a lot of time together biking in the mountains in Spain and going on trips and then when we came back, it just kind of always stuck as a family thing, but then I started branching off and doing it more on my own.

I would say there’s four main [biking] groups that I’m a part of. The one that I’ve been a member of the longest is the Centre County Crows, which is State College’s local youth mountain biking team. It’s part of a racing league, but we don’t really focus on racing on the team, it’s more about building a community and it’s just a place for—it’s 6th through 12th grade, and any ability, so you can have never biked before, or you can be, you know, going to the races and being really into it, and it’s just teaching kids how to mountain bike, pretty much, and that’s very fun. And then the one that I joined next is called the National Youth Bike Council, and this one, obviously, is national. Most of the members live in Philly though, and it just focuses on bike advocacy and encouraging bike safety from a youth perspective, so a lot of stuff like putting in protected bike lanes and advocating for cyclist rights and things like that, especially in big cities—like Philly’s very dangerous for cyclists. And then my mom recently started this program called ‘The Single Trek School for Girls’—we’re trying to think of a less gendered name for it, because it’s not actually just for girls, but we were having some trouble with that, because the focus of the group is to give middle school girls, but also nonbinary and trans kids, a place to learn mountain biking that isn’t predominately male space, because that’s what most of mountain biking is. And we found that there’s a huge barrier to people joining the Crows because they’re afraid of coming and being bad, and the main demographic is middle school girls who don’t want to come and be slow in front of all the boys who are hotdogging and wheeling and stuff, so we started this program, and I mainly coach that with my mom, which is nice. And then recently—I’m very excited about this—I just got accepted onto a racing team called The Philly Bike Expo Squad, which is also based in Philly, because that’s where all the cycling is. But it’s … focused on advocacy and diversity and equity in the cycling community and making a team that is a little more representative of the actual cycling population and I’m very excited because I’m not actually required to race with them I just have to do any kind of event. So it can be an advocacy event, it can be a self-planned event, or it can be a race. And the community seems really cool, so I’m excited to see how that works out. There’s a lot I [wanted] to see changed. The thing that I always noticed about cycling is that it’s a 50-year-old white male sport. That’s completely the demographic. And youth has been trickling in with things like NICA and that, but there’s really very little effort put into gender, racial, basically any sort of inclusion of anyone who’s not a white man. And personally, as a trans person, I see that a lot [in] gendered race categories. They’re very reluctant to have a, like [an] open category that isn’t male or female, which I think is stupid because it’d be really easy. And there’s a lot of—not gaslighting, but like not belief, especially because when I wear my cycling clothes I present very feminine because I wear very tight clothes, I’m pretty small, I ride women’s bikes because that’s what fits me, and a lot of times I’ll have—like I’ll tell people, and they’ll actually just say that like, ‘that’s not true.’ Like I’m racing in the women’s category, I’m on a women’s bike, like, that’s not like—nonbinary people don’t cycle, is basically a very predominate belief, especially in the racing world, which is very unfortunate, because obviously, that’s not true. But, I’ve been seeing lately that teams like the Philly Bike Expo, which I’m joining, are a lot more focused on—well, focusing on equity and making sure that everyone feels like they have a space in the community, which is nice. […] It was really nice because it was the first time I think I’d ever been accepted onto a team that I actually thought I would fit in on. Not only because there were other nonbinary people on the team, but also because—just the whole team is very diverse, not only in a gender sense, which is very nice to see and I think it just—it just felt like I wouldn’t be so alone at races if I had teammates who also were part of this team that was more open.

It’s very fun [to mentor other bikers]. It’s definitely hard because I don’t always know what to do, and there are cases when I want to do something for someone but I don’t know how or what specifically to do which can be a little discouraging. But overall, it feels very rewarding because I wish I had that when I was younger, but there wasn’t really that kind of community yet, and I really like cycling, obviously, so it’s really fun to be able to have fun and ride with people and try and give them some of that joy that I feel when I bike.

When I first started biking I think the thing I liked about it was not the freedom, but doing something new. Because at the time I started biking, I was going to school, I didn’t speak the language of the school I was going to, I didn’t have any friends, it was—I was very sad. And biking just enabled me to kind of see new things and have a little brightness in my life that wasn’t there in a lot of other places. And then I took that home with me and A, it’s just really fun, which is one thing. And also, now, I find it very valuable for alone time. ‘Cause I’ll go on hundred-mile rides and those take like ten or eleven hours, and I won’t really talk with anyone or anything, I’ll just listen to music or sing really loudly or not think about anything and it’s nice to just use that to recharge so that’s one of the things I’ve been enjoying recently about biking. […] My last race, which was 130 miles long, was in October, and my first race in the spring is in April, and those are kind of the bookends of when it’s warm enough to do that. But during the school year, definitely if I don’t get a ride in over the weekend I’ll be kind of crabby during the school week definitely because I didn’t have a chance to reset and be alone.”