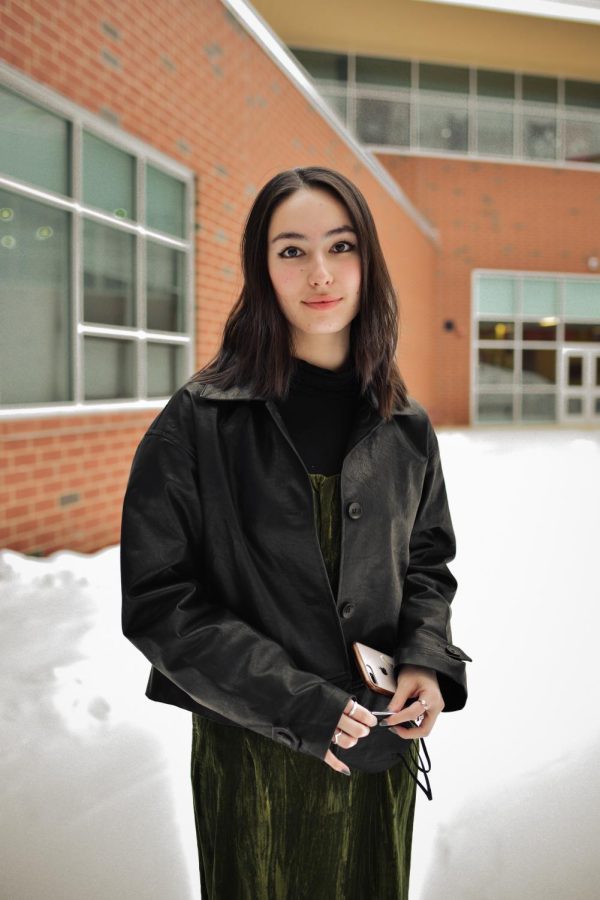 “So I songwrite, [that] is my main thing at the moment. I’m spending a lot of hours doing that. I’ve always loved English, because my parents are both English professors, but that has sort of led into a love of songwriting, and I think that English has really helped me become a better songwriter. […] My dad is not at all musical, although he would protest and say otherwise. But he’s not. But my mom’s side of the family is musical. My grandma was a really, really great musician, and my mom is, as well. She—I do a church gig, where I sing every Sunday, that’s my job, and my mom always accompanies me every Sunday and we’re always singing together. So yeah, music has definitely been a part of me growing up, for sure. [My mom and grandma] have really given me an appreciation for sound and for simplicity. I love music with lots of drums and instrumentation behind it, and lots of production value. That’s great, and has a time and place, but I think my grandma and my mom both sound incredibly amazing just with vocals and a little bit of piano. As a songwriter, I really value simplicity as well, and I definitely think I can attribute that to how amazing they both are when everything is stripped back and it’s just their voices and their instrument.

When I started [songwriting], I definitely valued lyrics that were very complex, but I think as I’ve—I think sometimes in songwriting it’s easy to sort of distill the truth, even though we see songwriting as such a truthful endeavor. Oftentimes I get clouded by wanting to sound smart or something when I’m writing. And so what I value now is more just saying how I feel without trying to write what I think people want to hear, just writing what I want to write.

I think what’s cool about songwriting is that you can write about yourself and you can also write about other people and other situations and made-up situations and things. Sometimes I get afraid of my own brain in terms of when I’m just consciously thinking about situations, and songwriting is the one place where I can sort of strip back any barriers that I’ve created for myself and just write about whatever I want. Even in our own brains, right, there’s like a taboo part about a lot of topics in high school that we just don’t wanna talk about or think about at all. Songwriting has allowed me to free myself up in ways that have been really beneficial. I think I’m really not very jaded or cynical, and I think it’s really easy to become that way in high school, and I think the main reason I’m not that way is because I can songwrite and get everything out that I want to and then come back to school with sort of a fresh mindset every day.

I did so much songwriting [during the pandemic]. I wanted to really challenge myself because I think, as you know, we get so busy during school, and I don’t get to write as much as I want. So, over the pandemic, I did one of those, like—I’m not the first person to do this, but like, ‘I have to write something every day.’ So I would write a song, or I’d write a piece of a song, or sometimes a lyric if I was super blocked up creatively. Doing that not only helped me deal with the magnitude of the situation that was the pandemic, but it also just helped me stay sharp. I feel like I was at home and I was doing all my schoolwork, but I just felt dulled down, like all of my senses were just less heightened than they normally are. Songwriting helped me feel like I was still staying on top of things, and I have something to say about the conversation, the larger conversation that was going on, which [was] really comforting, especially when I was alone and isolated from other people.” (1/2)

“I was talking with my mom, actually, the other day—and I could pull any number of things that my mom has said—but I’m struggling, like most people, with what I want to do in this next chapter of my life. And it’s something that I think you hear about, this little crisis that happens during senior year, [and] you don’t really believe it or realize the weight of it until it’s hitting you, full force, right now. So I was having a whole crisis, because I’m not sure I want to do musical theatre, and so I was freaking out, because I was like ‘All these people expect me to do this, and I’ve always been the girl that sings, and that’s who I am,’ you know? And my mom was just like, ‘Nobody can tell you you’re not successful if you’re happy.’ And I don’t know, it’s so easy to get caught up in what other people want and think and expect of you at this point in life. But I think I’ve always struggled—do you know ‘The Fault in Our Stars’? I’m not sure I really love that book anymore, but I’ve struggled with Augustus Waters syndrome, of like I need my life to be this grand thing and to mean something to people. And I don’t want to be famous, per se, but I want to make this big impact, and she sort of made me realize that I’m happy now. I’m happy with this life, with my friends, with the people I love, and maybe I’m not making the hugest impact in terms of the number of people that I’m meeting or talking to, but I know that everybody I talk to, I’m making a positive impact in their lives, and that’s what matters. And that whatever I do will be great, as long as I give it a hundred and ten percent.

I mean, maybe it’s not fair to say—like I don’t think it’s fair to say that I felt super, like there’s so many expectations from other people. I’ve always been in a very supportive community, in terms of that. So much of it is from myself, and the expectations that I put on myself. But I think it speaks to sort of the atmosphere of high school, which is that if you’re good at something, it becomes your thing, and people only associate you with that. It’s a combination of those two things. I don’t think that’s specific to musical theatre, you know, it’s applicable to almost everybody in this school. Everybody has their ‘thing’ that they’re expected to do, I just think it’s important to try to branch out and to take a step back and realize that the only person that’s really expecting you to do something is usually yourself, and if anybody else in your life is really pushing you to do something you don’t want to do, then they’re not worth being around.” (2/2)