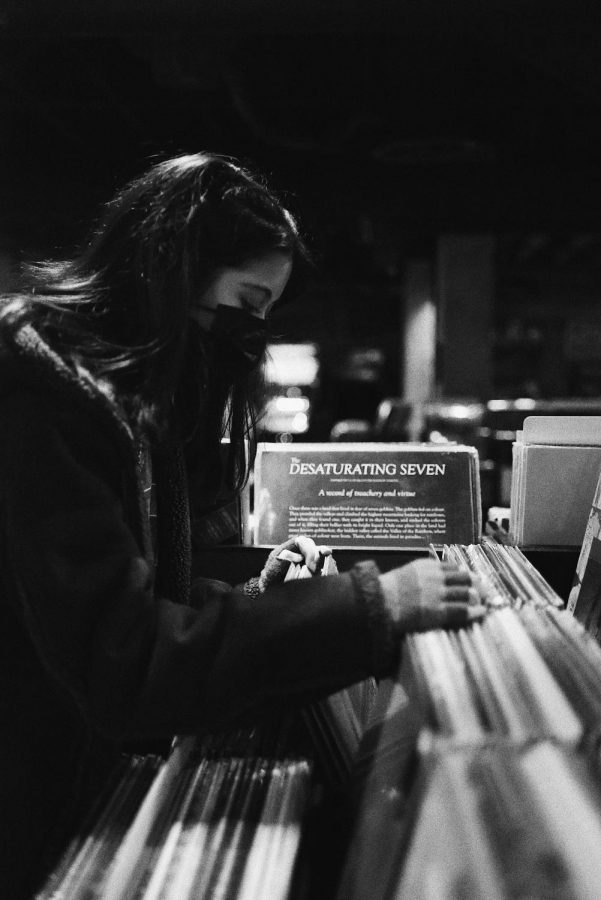 “I could talk about music for hours. Waking up early in the morning when I was really young, on a Sunday and it would be 10, and the sun would be beaming into my room–and that’s the only time I get sunlight because I’m on that side of the sun, so the window gets hit, okay yeah–but he’d just be blasting these 80s hits, like ‘Walk like an Egyptian’ and I really associate that with him now, but he’d just be blasting songs along those lines and I’d walk downstairs and it would just be booming in my ears. I think a lot of that side of my music taste has stemmed from my dad, and he was a DJ, so he’s also kind of obsessed with music so I’ve had extensive conversations about music with him. I also think that somehow, the ‘Guardians of the Galaxy’ movies violently influenced my music taste for a hot second, I’m not even gonna lie. It’s not like–like I guess I listened to that realm of music beforehand solely because of my dad, but then once I got like–because I was really into Marvel and I watched that, and I was like zazam, like I’m gonna deep delve into this stuff myself, and it has carried on throughout the years and now I am 17 and still obsessed with it. I would be dead without music. Like no cap. It’s like I’d be gone. Music gets me through every day I’m pretty sure. I don’t think I could go through a day without listening to music I think I would just decompose on the spot or something–or maybe combust, I think that’s what would happen. My body would just explode, or implode, one of the two. I genuinely–maybe I’m just scared of silence, because I can’t even sleep without white noise, but it’s so–I don’t even know the people that write these songs but they feel so personal, and it’s like sometimes I feel like they’re just basically taking the words out of my throat and it hits so deep. And other times it’s just fun funky beats I get to dance to and scream and it’s so nice and ‘Scotty Doesn’t Know’ is such a fun song to scream. Well, there is a negative side to music. If you listen to too much sad music, it for sure makes you more depressed. Like, from personal experience, I would just listen to sad music all the time and I don’t think that was my smartest idea. Like if you want a good cry, which is pretty healthy usually–unless it’s alarming–but if you just want a good cry and need to listen to an absolutely heartwrenching song then do it, like I full-heartedly support just sobbing. But if you make the soundtrack to your daily life just sad, depressing songs, you will be living sad, depressing days. Which is kind of alarming that it has that much impact on you. But what I recommend is listening to groovy dance music instead so now if you cry, at least you’re at a party. I associate music with nearly every aspect of my life. I have a playlist for each month and whenever I listen to one of the months I literally feel like I am being transported back in time and it is incredibly disorienting but it’s also kind of lovely ‘cause of how much I associate the memories with. I already touched on the association with music and songs with friends, and I still associate a shit ton of music with my friends and it makes me happy. It’s comforting and music is just so good. It’s so good.”